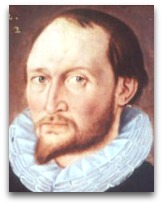 Overview
In c.1595, Harriot, in his manuscript notes, stated the following:

Quotes | On
The following are quotes on Harriot:

“Harriot is profound mathematician, along side Thomas Digges and John Dee.”

“Thomas Harriot was an innovative thinker and practitioner in several branches of the mathematical sciences: navigation, astronomy, optics, geometry and algebra, but he never published any of his scientific or mathematical findings. At his death he left behind over four thousand manuscript sheets of observations, calculations and diagrams, but the range of the contents and the disorder of the papers have defeated almost all subsequent attempts at publication.”

“Torporley became Viete’s (GME:23) amanuensis, and it was almost certainly through Torporley that Harriot acquired his detailed knowledge of Viete’s mathematics.”