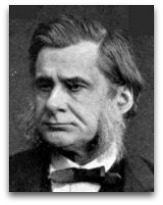 On 30 Jun 1860, Huxley, seven months after the publication of his friend Charles Darwin’s On the Origin of Species, famously debated Bishop Samuel Wilberforce. [14] Huxley, according to Christopher Hitchens (Ѻ), mopped the floor with Wilberforce, commenting that the debate was similar to the 1925 “Scopes Monkey Trial” debate.

Laws of nature
In 1868, Huxley penned his “A Liberal Education and Where to Find It” essay, wherein he gave a few well-apt quotes on the laws of nature and that if anything is to be called "education" this must be its focus: [10]

“Education is the instruction of the intellect in the laws of nature, under which name I include not merely things and their forces, but men and their ways; and the fashioning of the affections and of the will into an earnest and loving desire to move in harmony with those laws. For me, education means neither more nor less than this. Anything which professes to call itself education must be tried by this standard, and if it fails to stand the test, I will not call it education, whatever may be the force of authority, or of numbers, upon the other side.”

“It is a very plain and elementary truth, that the life, the fortune, and the happiness of every one of us, and, more or less, of those who are connected with us, do depend upon our knowing something of the rules of a game infinitely more difficult and complicated than chess. It is a game which has been played for untold ages, every man and woman of us being one of the two players in a game of his or her own. The chessboard is the world, the pieces are the phenomena of the universe, the rules of the game are what we call the laws of nature.”

“Every society, great or small, resembles ... a complex molecule, in which the atoms are represented by men, possessed of all those multifarious attractions and repulsions which are manifested in their desires and volitions, the unlimited power of satisfying which we call freedom ... the social molecule exists in virtue of the renunciation of more or less of this freedom by every individual. It is decomposed, when the attraction of desire leads to the resumption of that freedom the expression of which is essential to the existence of the social molecule. The great problem of social chemistry we call politics, is to discover what desires of mankind may be gratified, and what must be suppressed, if the highly complex compound, society, is to avoid decomposition.”

In 1962, in commentary on Huxley's call for the development of social chemistry, Austrian sociologist Werner Stark commented: [8]

“Why should no social chemistry ever been developed?” He states that “nobody would suggest that the social scientists should imitate meteorology, for this discipline does not appear to have got very far … but what about chemistry? A sociology based on chemistry [has] in fact been called for, but, significantly, [this call has] found no echo. It would have been easy to take up this suggestion and develop it further. An intending social chemist would have found it one whit more difficult to manufacture a sociological parallel to the Boyle-Charles law than Haret did to the Newtonian propositions. But the experiment appears never to have been tried. Why?”

Huxley is often cited as having the mindset that he expected the gap between the non-living and living things to be bridged. (Ѻ) The following are example quotes:

“The elements of living matter are identical with those of mineral bodies; and the fundamental laws of matter and motion apply as much to living matter as to mineral matter; but every living body is, as it were, a complicated piece of mechanism which ‘goes’, or lives only under certain conditions.”

“In the living world facts of this kind are now understood to mean evolution from a common prototype. It is difficult to imagine that in the non-living world they are devoid of significance. It is probable that they mean that evolution of our elements from a primary undifferentiated form of matter.”

Consciousness | Movement
In 1901, Huxley stated the following so-called "zombie argument", as it is called in modern consciousness debates:

“The argument which applies to brutes [zombies] holds equally good of men … It seems to me that in men, as in brutes, there is no proof that any state of consciousness is the cause of change in motion of the matter of the organism.”

Meaning that, according to Huxley, consciousness is NOT the cause of change in motion of human (see: Library walk problem).

Huxley stated an evolution version of Laplace’s demon as such: [4]

“If the fundamental proposition is true, that the entire world, living and not living, is the result of the mutual interaction, according to a set of definite laws, of the forces possessed by the molecules of which the primitive nebulosity of the universe was composed, it is not less certain that the existing world law, potentially, in the cosmic vapor, and that a sufficient intellect could, from a knowledge of the properties of the molecules of that vapor, have predicted, say the state of the Fauna of Great Britain in 1869, with as much certainty as one can say what will happen to the vapor of the breath in a cold winter’s day.”

This “sufficient intellect” might be categorized as Huxley’s demon.

Evolution
Huxley seems to have been the inspiration for the now-famous evolution timeline drawings, supposedly as found in (or derived from) his book 1863 Man’s Place in Nature:

Family
Noted grandchildren of Thomas Huxley include: writer and human entropy theorist Aldous Huxley, who wrote about entropy, second law, and the soul in many of his works, and chnopsologist (biologist) Julian Huxley, who had views on anti-entropy and evolution. In a curious anecdote, Julian, at age four, after reading Charles Kingsley's The Water Babies, and finding his grandfather mentioned, wrote to him:

"Dear Grandpater have you seen a Water-baby? Did you put it in a bottle? Did you wonder if it could get out? Can I see it some day? Your loving Julian."

To which Thomas replied: "I never could make sure about that Water Baby. I have seen Babies in water and Babies in bottles" but the baby in water was not in a bottle and the Baby in the bottle was not in water." [5]

Students
A noted student of Huxley was Lloyd Morgan who's 1929 work Mind at the Crossways expanded on his mentor's use of the "animalcule" concept.

Quotes | On
The following are quotes on Huxley:

“Huxley, in his Place of Man in Nature (1863), very ably discussed this most important consequence of evolution, according to which, with the aid of comparative anatomy and ontogeny, and the support of the facts of palaeontology, he proved that the ‘descent of man from the ape’ is a necessary consequence of Darwinism, and that no other scientific explanation of the origin of the human race is possible.”

Quotes| By
The following are quotes by Huxley:

“Mind [or consciousness] is a function of matter, when that matter has attained a certain degree of organization.”

“It may be asked if even-handed justice has eve yet been dealt out to the sages of antiquity, who for eight centuries, from the time of Thales to that of Galen, toiled at the foundations of physical science.”

“Boyle did a great service to science by his Skeptical Chemist, I am inclined to think that, at the present day, a Skeptical Biologist might exert a equally beneficent influence.”


“All physical science starts from certain postulates. One of them is the objective existence of a real world.”