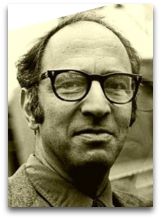 In existographies, Thomas Kuhn (1922-1996) (CR:30) was an American physicist and noted "paradigm change" science historian noted for his 1957 article “Energy Conservation as an Example of Simultaneous Discovery” on the history of the discovery of the conservation of energy, the philosophical framework of which he used as the model for his most famous 1962 book The Structure of Scientific Revolutions, wherein he outlines a general theory of how "scientific revolutions" occur.

Energy conservation | simultaneous discovery
Kuhn's 1957 article “Energy Conservation as an Example of Simultaneous Discovery” famously categorizes twelve possible candidates for the claimant of the "discoverer" of the conservation of energy, dividing the aspirants into three groups of descending order of legitimacy:

In article, which is fairly detailed, in depth, and dense, as far as history of thermodynamics articles go, Kuhn looked to discern the trigger factors behind scientific discovery, by studying the behind the scenes historical details to the discovery of the mechanical equivalent of heat (via Joule) and the conservation of energy (via Mayer), and the conservation of force (via Helmholtz) [1]

Kuhn's most frequently-cited work is 1962 The Structure of Scientific Revolutions, in which he popularizes the idea of a paradigm shift. [2] In interview, Kuhn, commented on his undergraduate course with Philipp Frank and graduate course with Percy Bridgman, stating that: [3]

“I’ve always rather liked thermodynamics; that sense of a subject which is largely mathematical but which gives you important physical consequences is a strange, tasteful experience.”

Trigger factors
In thermodynamics, he is most noted for his classic 1959 essay “Energy Conservation as an Example of Simultaneous Discovery”, in which he sought to discover the source of the phenomenon called simultaneous discovery, arguing that between 1832 and 1854 twelve scientists—above all, Robert Mayer, James Joule, Ludwig Colding, and Hermann Helmholtz—all “grasped for themselves” the essential elements of the concept of energy and its conservation. In this context, Kuhn asked why these ‘elements’ became accessible at that time, thereby seeking to identify not the innumerable ‘prerequisites’ of the principle of energy conservation, but rather what he called ‘trigger factors’. [1]

Education
Kuhn completed his BS (1943), MS (1946), and PhD (1949) in physics at Harvard University. He later taught history of science at Harvard and philosophy at the University of California, Berkeley.

Quotes | By
The following are quotes by Kuhn:

“Almost always the men who achieve these fundamental inventions of a new paradigm have been either very young or very new to the field whose paradigm they change.”