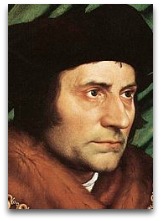 Overview
More, in his work, attempted to reconcile Epicurus and Lucretius with Christian thinking; his Utopia was the result. [2]

Genius
In 2017, Travis Curtright, in his “Thomas More and the ‘genius’ of Utopia” (Ѻ), digresses on whether or not Desiderius Erasmus considered More a genius; the opening of which is as follows:

“Desiderius Erasmus (1466–1536) and Peter Giles (1486–1533), in their prefatory letters to the 1518 edition of Utopia, employ the Latin word ingenium in their description of Thomas More. Both authors use this term to laud what G. C. Richards’ longstanding translation renders as “genius.” Robert M. Adams, in the more recent Cambridge translation, supplies “wit” in the instance of Erasmus’ letter but retains “genius” for Giles’ usage. At stake in these choices is a question about how Erasmus and Giles—not to mention those humanist readers who approach Utopia through their prefatory letters—understand More's literary achievement.

Did Erasmus and Giles think of More as a “genius”? Both letters are written in the genre of epideictic oratory, the classical designation for speeches of praise or blame, but the term “genius” raises a philological difficulty for today's readers in addition to those of rhetorical structure or authorial tone. In C. S. Lewis’ Studies of Words, he understands ingenium to mean “‘talent’ or even ‘genius’” but acknowledges that it is impossible to employ either term “without foisting upon Roman and English writers a far later, and Romantic, distinction.” Lewis worries “the modern cant would say ‘creative.’”

Still other and more recent word genealogies remind us how the original Latin term genius represents a guiding spirit like Socrates’ daimon. It was only during the Enlightenment that “genius” emerged from ingenium to fashion the modern sense of an extraordinary and creative mind, a “genius.” So it would appear to many that More, despite centuries of praise for Utopia and its widespread influence, could not be considered a “genius” until the eighteenth century.”

Likewise, Brad Birzer, in his “The Genius of Sir Thomas More”, devotes discussion to the unsung genius of More. [3]

Reaction end
More was beheaded by his friend Henry the VIII for not sanctioning the king’s divorce as well as opposing the 1534 Act of Supremacy, which overturned a thousand years of Christian tradition, i.e. it granted the king the right to determine religious matters.

Quotes | Utopia
The following are noted quotes from Utopia:

“Called once “No-place” because I stood apart. Now I compete with Plato’s state, perhaps Surpass it; what he only wrote about I have alone in fact become: the best In people, wealth, in laws by far the best. “Good-place” by rights I should be called.” [from original title page] “I have taken great pains to prevent any inaccuracy in the book , so too, when I am in doubt, I would rather say something inaccurate than tell a lie, because I would rather be honest than clever.” (5) “For it did not occur to us to ask, or him to mention, in what part of that new world Utopia is located.”

“Most people know nothing about learning; many despise it. Dummies reject as too hard whatever is not dumb. The literati look down their noses at anything not swarming with obsolete words. Some like only ancient authors; many like only their own writing. One person is so dour that he cannot abide jokes; another is so witless that he cannot stand anything witty. Some have so little nose for satire that they dread it the way someone bitten by a rabid dog fears water. Others are so changeable that their approval depends on whether they are sitting down or standing up. They sit around in taverns and over their cups they pontificate about the talents of writers, condemning each author just as they please, pulling him down through his writings as if they had grabbed him by the hair, while they themselves are safe and out of harm’s way, as the saying goes, because these good men have their whole heads smooth-shaven so that there is not a single hair to grab on to.”

“Certainly he has sailed, not like Palinurus, but rather like Ulysses, or even better like Plato. This man, who is named Raphael— his family name is Hythloday— has no mean knowledge of the Latin language but is especially proficient in Greek; he has devoted himself to Greek more than to Latin because he has totally committed himself to philosophy and he knew that in that field there is nothing of any importance in Latin except some works of Seneca and Cicero. Out of a desire to see the world he left to his brothers his heritage in his homeland (he is from Portugal).”

“A pretty face may be enough to catch a man, but it takes character and good nature to hold him.”

“Congratulations, then, my dear Erasmus, on your outstanding virtuous qualities; however, if on occasion some good person is unsettled and disturbed by some point, even without a sufficiently serious reason, still do not be chagrined at making accommodations for the pious dispositions of such men. But as for those snapping, growling, malicious fellows, ignore them and, without faltering, quietly continue to devote your self to the promotion of intellectual things and the advancement of virtue.”

“The many great gardens of the world, of literature and poetry, of painting and music, of religion and architecture, all make the point as clear as possible: The soul cannot thrive in the absence of a garden. If you don't want paradise, you are not human; and if you are not human, you don't have a soul.”

“One of the greatest problems of our time is that many are schooled but few are educated.”