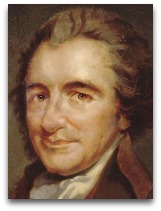 Associates
In England, Paine met Benjamin Franklin who gave him letters of introduction to go to America. In 1802, Paine, when he returned to America, was befriended by Thomas Jefferson. [4] He also was friends with Elihu Palmer and his wife, who nursed him.
Origin of Christianity
In c.1803, Paine drafted a chapter entitled “Origin of the Christian Religion”, where, among other things, he asserted: [3]

“The [Christian] Cosmogony, that is, the account of the creation with which the book of Genesis opens, has been taken and mutilated from the Zend-Avesta of Zoroaster, and was fixed as a preface to the Bible after the Jews returned from captivity in Babylon, and that the Robbins of the Jews do not hold their account in Genesis to be a fact, but mere allegory. The six thousand years in the Zend-Avesta, is changed or interpolated into six days in the account of Genesis.”

In c.1804, Paine, in his “Essay on the Origin of Free-Masonry”, citing his “Origin of Christianity” chapter, stated the following: [4]

“In Masonry many of the ceremonies of the Druids are preserved in their original state, at least without any parody. With them the Sun is still the Sun; and his image, in the form of the sun is the great emblematical ornament of Masonic Lodges and Masonic dresses. It is the central figure on their aprons, and they wear it also pendant on the breast in their lodges, and in their processions. It has the figure of a man, as at the head of the sun, as Christ is always represented.

At what period of antiquity, or in what nation, this religion was first established, is lost in the labyrinth of unrecorded time. It is generally ascribed to the ancient Egyptians, the Babylonians and Chaldeans, and reduced afterwards to a system regulated by the apparent progress of the sun through the twelve signs of Zodiac by Zoroaster the law giver of Persia, from whence Pythagoras brought it into Greece. It is to these matters Dr. Dodd refers in the passage already quoted from his oration.

The worship of the Sun as the great visible agent of a great invisible first cause, "Time without limits," spread itself over a considerable part of Asia and Africa, from thence to Greece and Rome, through all ancient Gaul, and into Britain and Ireland.”

Religion | Beliefs
Paine, in respect to his upbringing, stated that his father was a Quaker. [1] His own mind, in youth, as he says, was had a natural bent to science, astronomy in particular.

Quotes | On
The following are quotes on Paine:

Quotes | By
The following are quotes by Paine:

“It is necessary to the happiness of man that he be mentally faithful to himself. Infidelity does not consist in believing, or in disbelieving, it consists in professing to believe what one does not believe.”

“When also I am told that a woman, called the Virgin Mary (see: Isis), said, or gave out, that she was with child without any cohabitation (see: virgin birth) with a man, and that her betrothed husband, Joseph (see: god Geb), said that an angel told him so, I have a right to believe them or not.”

“It appears that Thomas [see: Doubting Thomas] did not believe the resurrection and as they say would not believe without having ocular and manual demonstration himself. So neither will I: and the reason is equally as good for me and every other person as for Thomas.”

“The Christian mythologists, calling themselves the Christian church, have erected their fable, which for absurdity and extravagance is not exceeded by anything that is to be found in the mythology of the ancients.”

“Are we to suppose that every world in the boundless creation had an Eve, an apple, a serpent, and a redeemer?”

“The age of ignorance commenced with the Christian system.”

“I wrote Common Sense the latter end of the year 1775, and published it the first of January, 1776. Independence was declared the fourth of July following.”

“I trouble not myself about the manner of future existence. I content myself with believing, even to positive conviction, that the power that gave me existence is able to continue it, in any form and manner he pleases, either with or without this body; and it appears more probable to me that I shall continue to exist hereafter than that I should have had existence, as I now have, before that existence began.”

“Deism was the religion of Adam, supposing him not an imaginary being; but none the less must it be left to all men to follow, as is their right, the religion and worship they prefer.”

“As it is nothing extraordinary that a woman should be with child before she was married, and that the son she might bring forth should be executed, even unjustly, I see no reason for not believing that such a woman as Mary, and such a man as Joseph, and Jesus, existed; their mere existence is a matter of indifference, about which there is no ground either to believe or to disbelieve.”

“The study of theology as it stands in Christian churches, is the study of nothing; it is founded on nothing; it rests on no principles; it proceeds by no authorities; it has no data; it can demonstrate nothing; and admits of no conclusion. Not any thing can be studied as a science without our being in possession of the principles upon which it is founded; and as this is not the case with Christian theology, it is therefore the study of nothing.”

“I would give worlds, if I had them, that the Age of Reason had never been published. Oh, god, save me; for I am at the edge of hell alone.”