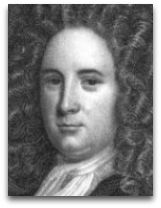 In existographies, Thomas Savery (c.1650-1715) (IQ:170|#325) (EP:21) (CR:33), aka “Captain Savery”, the term “Captain” being a title (Ѻ) given in Cornwall to the superintendent of works connected with a mine, was an English engineer, and “commissioner of sick and wounded” (Switzer, 1729), noted for his 1698 construction of his "Savery engine", aka Miner’s friend, a suction pump type of steam engine designed for the removal of water from mines, the world’s first operational steam engine. [1]

Overview
On 25 Jul 1698, Savery patented a design for a steam engine to be employed for pumping water out of mines. [5]

In 1699, Savery submitted a working model of his engine to the Royal Society, during which time successful experiments were made with it. [5]

On 14 Jun 1699, Savery demonstrated a small working model of his steam engine at Gresham College before an audience where it was approved of; supposedly, something akin to the following design: (Ѻ)

In 1701, Savery, in his The Miner’s Friend: or an Engine to Raise Water by Fire; and of the Manner of Fixing it in Mines; with an Account of the Several Other Uses it is Applicable Unto; and an Answer to the Objections Made Against It, gave a draft-overview of his new machine, along with the following four illustrations. [1]

In the decade to follow, Savery built several of his devices, which worked for raising water for the use of flushing toilets in homes, but ran into problems, when it came to applications in mines; the following is one retrospective synopsis of these issues and how Thomas Newcomen stepped into make the next improved design:

“Savery made a great many experiments to bring this machine to perfection, and did erect several, which raised water very well for gentlemen's seats (Ѻ) [toilets]; but could not succeed for mines, or supplying towns, where the water was to be raised very high and in great quantities: for then the steam required being boiled up to such a strength, as to be ready to tear all the vessels to pieces. The heat, which is sufficient to boil water, will produce steam whose spring is of the same strength as common air; but that steam by the removal of the atmosphere and letting it return to press, is only capable of bringing the water up to a little above 30 feet but for every 32 feet that the wafer is to be raised higher, the steam must be so many times stronger than the air: for example, if it is to be forced up 90 or 100 foot higher than the receivers, where the steam acts upon it, the steam must be three or four times stronger than the common air; and a great deal stronger than that (perhaps six times stronger) upon the following account: The hot steam striking upon the surface of cold water in the receivers, condenses itself, and thereby becomes uneffectual till the surface of the water and a small depth of it, is warm enough not to condense any more steam; and then (and not before) the water yields to the pressure of the spring of the steam to make it rise. I have known Savery, at York buildings, make steam eight or ten times stronger than common air; and then its heat was so great, that it would melt common soft solder; and its strength so great as to blow open several of the joints of his machine: so that he was forced to be at the pains and charge to have all his joints soldered with spelter or hard solder. These discouragements stopped the progress and improvement of this engine, till Mr. Newcomen, an iron-monger, and John Cawley, a Glazier living at Dartmouth, brought it to the present form in which it is now used, and has been near these 30-years.”

(add)
Quotes | Employed
The following are quotes employed by Savery:

Quotes | On
The following are quotes on Savery:

“No contrivance for raising water is more justly surprising than the ‘fire engine’, the particular contrivance, and sole invention of a gentleman with whom I had the honour long since to be well acquainted. I mean the ingenious Captain Savery, some time since deceased, but then a most noted engineer, and one of the commissioners of sick and wounded. This gentleman's thoughts were always employed in hydrostatics, or hydraulics, or in the improvement of water-works; and the first hint from which it is said he took this engine was from a tobacco-pipe, which he immersed to wash or cool it, as is sometimes done. He discovered by the rarefaction of the air in the tube, by the heat or steam of the water, and the gravitation or impulse of the exterior air, that the water was made to spring through the tube of the pipe in a wonderful, surprising manner; though others say, that the learned Marquis of Worcester, in his Century of Inventions (which book I have not seen) gave the first hint for this raising water by fire. It was a considerable time before this ingenious person (Savery), who has been so great an honour to his country, could, as he himself tells us, bring this his design to perfection, on account of the awkwardness of the workmen, who were necessarily to be employed about the affair; and I have heard him say myself that the very first time he played it was in a porter's house at Lambeth; where, though it was a small engine, yet it forced its way through the roof and struck up the tiles, in a manner that surprised all the spectators.”

— Stephen Switzer (1729), Introduction to a System of Hydrostatics and Hydraulics [3]

“Captain Savery, having read the Marquis of Worcester’s book [Century of Inventions, 1655], was the first who put in practice the raising ‘water by fire’, which he proposed for the draining of mines. His engine is described in Harris’s Lexicon (see the word ‘engine’) which being compared with the Marquis of Worcester’s description, will easily appear to have been taken from him; though Savery denied it, and the better to conceal the matter, bought up all the Marquis of Worcester's books that he could purchase in Paternoster Row, and elsewhere, and burned them in the presence of the gentleman his friend, who told me this. He said that he found out the ‘power of steam’ by chance, and invented the following story to persuade people to believe it, viz. that having drank a flask of Florence at a tavern, and thrown the empty flask upon the fire, he called for a basin of water to wash his hands, and perceiving that the little wine left in the flask had filled up the flask with steam, he took the flask by the neck and plunged the mouth of it under the surface of the water in the basin, and the water of the basin was immediately driven up into the flask by the pressure of the air. Now he never made such an experiment then, nor designedly afterwards, which I thus prove: I made the experiment purposely with about half a glass of wine left in a flask, which I laid upon the fire till it boiled into steam: then putting on a thick glove to prevent the neck of the flask from burning me, I plunged the mouth of the flask under the water that filled a basin; but the pressure of the atmosphere was so strong, that it beat the flask out of my hand with violence, and threw it up to the ceiling. As this must also have happened to Captain Savery, if ever he had made the experiment, he would not have failed to have told such a remarkable incident, which would have embellished his story.”

“When a comparison is made between Savery’s engine [1698] and those of his predecessors, the result will be in every respect favorable to his character as an inventor, and as a practical engineer; all the details of his invention are made out in a masterly style, and accidents and contingencies are provided for, so as to render it a real working engine; whereas De Caus [Caus engine, 1615], the Marquis of Worcester [Worcester engine, 1663], Sir Samuel Morland [Morland engine, 1683], and Papin [Papin engine, 1690], though ingenious philosophers, only produced mere outlines, which required great labor and skill of subsequent inventors to fill up, and make them sufficiently complete to be put in execution.”

“I am very sensible a great many among you do as yet look on my invention of raising water by the impellent force of fire, a useless sort of a project, that never can answer my designs or pretensions; and that it is altogether impossible that such an engine as this can be wrought underground, and succeed in the raising of water, and draining your mines, so as to deserve any encouragement from you. I am not very fond of lying under the scandal of a bare projector; and, therefore, present you here with a draught of my machine, and lay before you the uses of it, and leave it to your consideration whether it be worth your while to make use of it or no. I can easily give grains of allowance for your suspicions, because I know very well what miscarriages there have been by people ignorant of what they pretend to.”

“Though my thoughts have been long employed about waterworks, I should never have pretended to any invention of that kind, had I not happily found out this new, but yet a much stronger and cheaper force or cause of motion, than any before made use of. But finding this of rarefaction by fire, the consideration of the difficulties the miners and colliers labor under by the frequent disorders, cumbersomeness, and in general of water-engines, encouraged me to invent engines to work by this new force : that though I was obliged to encounter the oddest and almost insuperable difficulties, I spared neither time, pains, nor money, till I had absolutely conquered them..”

“Such an engine will do the work of ten or twelve of horses.”