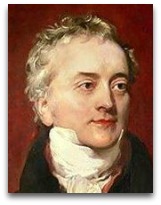 In existographies, Thomas Young (1773-1829) (IQ:195|#11) [RGM:658|1,500+] (Murray 4000:19|P) (library:1,000+) [LPKE] [polymath] (RE:56) (CR:103) was an English physician-physicist and linguist, a "child prodigy" turned "phenomenon Young" (medical school classmates) turned "walking encyclopedia" (Robinson), characterized as "one of the most acute men" (Helmholtz), a "polymath of amazing reach" (Zajonc), "highly intelligent" (Cantor), "last man to known everything" (Ruhah), etc., notable for his 1801 wave theory of light, in which he showed that each color of light is associated with a particular wave; a theory which he proved in his circa 1804 double-slit experiment, which show that light waves interact with each other constructively and destructively; for being the first to define by “heat” and “energy”, in 1807, in the modern physical sense; for his modulus of elasticity work (1807); and for his 1814 to 1818 work on the partial translation of the Rosetta Stone, the key to the later understanding of the Egyptian origin to seventy-two percent of all modern religions. [1]

Child prodigy
Young was a significant child prodigy. At two, Young was reading, and by four had read the Bible twice.

At age six, Young had commenced Latin study and could repeat lengthy poems, such as Oliver Goldsmith’s The Deserted Village (1770)—a work of social commentary, which condemns rural depopulation and the pursuit of excessive wealth—by rote.

While a teen, he could read Greek, Latin, Hebrew, Persian, Syriac, and Chaldean; and also taught himself calculus, studied the sciences, learned how to construct his own optical devices, and learned medicine.

At 14 he was tutoring others on the classics. By age twenty he had also learned French, German, Spanish, Arabic and Italian. He also studied art and learned to play the flute. He was not a complete nerd, either; he could also ride horses, sing, and dance. Once he walked over 170 miles to see an art exhibition.

Overview
The modern physics meaning of the term is generally attributed to English physicist and physician Thomas Young who in 1807 used the term energy, based on the Greek word ένεργεια meaning efficacy or effective force, as an abbreviation for the sum of kinetic energy and gravitational potential energy of a mass and the elastic energy of a spring to which the mass may be attached. [2] In more detail, under the guidance of American-born English physicist Benjamin Thomson, in 1802 Young began to prepare lectures in natural philosophy for the Royal Society. In them, he dealt with the quantity “vis viva” and in 1807 introduced the term energy for it: [3]

“The term energy may be applied, with great propriety, to the product of mass or weight of a body, into the square of the number expressing its velocity. Thus, if the weight of one ounce moves with a velocity of a foot in a second, we call its energy 1; if a second body of two ounces has a velocity of three feet in a second, its energy will be twice the square of three, or 18.”

In this sense, Young defined energy as:

To clarify that Young was the first to have mathematically coined the term "energy", years later Scottish mathematical physicist William Thomson stated before an audience, for instance, that “the very name energy, though first used in its present sense by Thomas Young about the beginning of this century, has only come into use practically after the doctrine which defines it had ... been raised from mere formula of mathematical dynamics to the position it now holds of a principle pervading all nature and guiding the investigator in the field of science.” [4]

Kinetic energy
In 1811, in partial correction to Young’s expression, Italian mathematician Joseph Lagrange used calculus to show that a factor of two is involved in the relationship “potential” (potential energy) and “vis viva” (kinetic energy). [3] In the symbols used by Lagrange, i.e. T as kinetic energy, in his 1788 Analytical Mechanics:

where 2T denotes the whole "living force of the system". [5]

Lagrange
In mid-1814, Young, while studying the Rosetta Stone in Worthing, was approached by Scottish editor Macvey Napier about making contributions to the Encyclopedia Britannica. Young, at first initially refused, but would eventually go on to contribute some 380 quarto pages—his article on “languages” alone runs some 33,000 words—over the course of 9 years, on a number of subjects. Among biographies, which, as he said, “seldom amused him much”, the biography on Joseph Lagrange was the only one he did “con amore”, i.e. with love, as he reported in a letter to Napier. The following are some of the ripe letter excerpts by Young on this matter:

“Lagrange will be an arduous task but I must not flinch from it; I cannot promise it till Christmas; it cannot be long, probably longer than any of my biographical articles; but the labor will be much more than in proportion to its length.”

“The biographical articles seldom amuse me much in writing; there is too little invention to occupy the mind sufficiently: I like to a deep and difficult investigation when I happen to have made it easy to myself if not to all others—and there is a spirit of gambling in this, whether as by the cast of a die, a calculation a perte de vue [i.e. a farfetched calculation] shall bring out a beautiful and simple result, or shall be wholly thrown away. Scientific investigations are a sort of warfare, carried on in the closet or on the couch against all one’s contemporaries and predecessors; I have often gained a single victory when I have been half asleep, but more frequently found, on being thoroughly awake, that the enemy had still the advantage of me when I thought I had him fast in a corner—and all this, you see, keeps one alive.”

Young cited, and in many cases summarized, more than 100 articles of Lagrange, in the writing of his Britannica article.

Quotes | By
The following are noted quoted by Young:

“Whoever would arrive at excellence must be self-taught. There is, in reality, very little that a person who is serious and industriously disposed to improve may not obtain from books with more advantage than from a living instructor.”

“The longer a person has lived the less he gains by reading, and the more likely he is to forget what he has read and learnt of old; and the only remedy that I know of is to write upon every subject that he wishes to understand, even if he burns what he has written.”