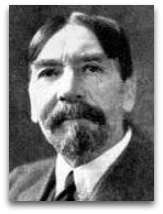 In hmolscience, Thorstein Veblen (1857-1929) was an American economist, cited by Robert Heilbroner as someone who became known as the apocryphal “last man who knew everything”, notable, in physical economics, for his 1900 discussions on a possible “law of conservation of economic energy”, which American physical economics historian Philip Mirowski’s seems to think is a “bold assertion in the face of ignorance”, and for being one of the first to work in the field of "evolutionary economics" a term he coined. [1]

Veblen was one of the members of the technocracy school.

“The modern scientist is unwilling to depart from the test of causal relation or quantitative sequence. When he asks the question, Why? he insists on an answer in terms of cause and effect. He wants to reduce his solution of all problems to terms of the conservation of energy or the persistence of quantity.”


Leisure class theory
Veblen is best-known for his 1899 “conspicuous consumption” theory, outlined in his The Theory of the Leisure Class, of the function of the leisure class. [2] The following are some of his popular quotes on this subject: [3]

“Conspicuous consumption of valuable goods is a means of reputability to the gentleman of leisure.”

“The basis on which good repute in any highly organized industrial community ultimately rests is pecuniary strength; and the means of showing pecuniary strength, and so of gaining or retaining a good name, are leisure and a conspicuous consumption of goods.”

“In itself and in its consequences the life of leisure is beautiful and ennobling in all civilized men’s eyes.”

Education
In 1880, Veblen completed his BA at Carleton College, Minnesota, and his PhD in 1884 at Yale University with a dissertation on "Ethical Grounds of a Doctrine of Retribution". He then spent six years on his family farm – ostensibly to recover from malaria – reading voraciously; often retreating to an isolated cabin in northern Wisconsin to focus on his studies. [4] In 1891, he left the farm, to study economics as a graduate student at Cornell University under James Laughlin.

“The outcome of any serious research can only be to make two questions grow where only one grew before.”