or "Tehuti" (Djehuti), is the Egyptian god of time, also a moon god, generally depicted as an Ibis-headed man, with or with out a moon symbol head piece; generally noted for having been, in Egyptian mythology, in the earlier period, the "judge of the two combatant gods" in the famous battle between Horus, god of North Egypt (Lower Egypt), and Set, god of South Egypt (Upper Egypt) for control of Egypt, at the time of the formation of the 1st Dynasty (3,100BC).

Overview
In 1904, Wallis Budge, in his The Gods of the Egyptians, opens to the following statement about Thoth: [1]

“The hymns to Ra which are found in the Book of the Dead and in other funeral works of the ancient Egyptians state that the deities Thoth and Maat stand one on each side of the great god in his boat, and it is clear that they were believed to take some important part in directing its course; and as they were with Ra when he sprang up from the abyss of Nu their existence must have been coeval with his own.”

“Thoth was a self-begotten god who made calculations concerning the stablishing of the heavens, and the stars, and the earth; was the heart of Ra, master of law, both in the physical and moral conceptions of the knowledge of ‘divine speech’. He was the inventor and god of all arts and sciences, the ‘lord of books’, the ‘scribe of the gods’, and ‘mighty in speech’, i.e. his words took effect, and he was declared to be the author of many of the funeral works by which the deceased gained everlasting life.”

Here, to note, we see the prototype modern of "Moses" figure as author of the Old Testament, as the modern description tells us.

Moon god
Thoth, originally, was a moon god; the following are representative depictions of him with the moon symbol and moon crescent on his head: 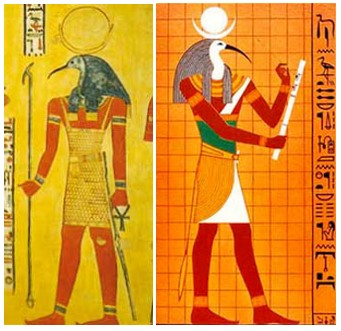 His role as moon god can be seen in the story of the resurrection from the dead of Horus from a scorpion bite (see: Joshua 10:13) and how the Easter has to be celebrated during a full moon (see: black rite).

In short, the reason why the resurrection of Jesus from the dead HAS to occur (or be celebrated) on (or near) a full moon, is that the resurrection or revival of both Horus (see: Joshua 10:13) and Osiris (see: black rite) from the dead needed to have the presence and magical powers of the Egyptian moon god Thoth to have worked. Thoth stopped time during the resurrection of Osiris and Thoth came to the aid of crying Isis to help revive her dead son Horus, following a scorpion sting, in the original Egyptian version of the myth. By the time, 2,500-years later, this myth found its way into the Roman era, the polytheism of Osiris and Horus, became Osiris-Horus or Horus Christ, which became Jesus Christ and the celebration of Easter.

Hermes
In c.800BC, in Greece, via Greek mythology, the character of Thoth either was the mold for the Greek god Hermes and or they were later syncretized, during the Ptolemaic Dynasty period, such that the attributes of Thoth were subsumed into Hermes.