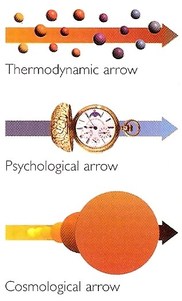 In science, time is a dimension that enables two otherwise identical events that occur at the same point in space to be distinguished. [1] The interval between two such events forms the basis of time measurement. The quantity of the second, symbol t, unit s, defined as the duration of 9,192,631,770 periods of the radiation corresponding to the transition between the two hyperfine levels of the ground state of the cesium atom at rest at a temperature of 0 K, is the standard System International (SI) dimension of time. [2]

(b) one complete heat cycle occurs
(c) that dQ/T is the amount entropy that increases or irreversibly remains residually bound in the system.

Extrapolation beyond these core precepts, e.g. references to tendencies of disorder, relations to chaos, psychological arrows, etc., typically result in only approximate, vague, or unjustified verbal pronouncements. In more complicated systems, time is measured thermodynamically by free energy or rather by a decrease in free energy as plotted out over the extent (progress in time) of the reaction or process. Specifically, in 1882 German physician and physicist Hermann Helmholtz concluded that the work performed by the free energies of a system determine the direction of chemical change. [4] Subsequently, natural processes, e.g. evolution (a chemical process), will occur spontaneously only in the direction of a minimizing free energy effect.

History
The conception of time in thermodynamics has checkered history involving a number of individuals, originating from a number of points of view. The core seed of the idea stems from German physicist Rudolf Clausius who in 1865 declared in lecture, in a reading at the Philosophical Society of Zurich on the 24th of April, regarding the first and second laws of thermodynamics, that: [5]

On the concluding page the 1965 English translation of his famous textbook Mechanical Theory of Heat, these two phrases were listed, with the following concluding paragraph, such that the word “world” was translated as “universe”: [6]

For the present I will confine myself to the statement of one result. If for the entire universe we conceive the same magnitude to be determined, consistently and with due regard to all circumstances, which for a single body I have called entropy, and if at the same time we introduce the other and simpler conception of energy, we may express in the following manner the fundamental laws of the universe which correspond to the two fundamental theorems of the mechanical theory of heat:

The second of these postulates led to idea that concept of entropy gives directionality to the movement of the universe. In 1873, for instance, American mathematical physicist Willard Gibbs utilized Clausius' entropy concept in the study of the graphical behaviors of substances thus arriving at the view that one "should be able to foretell what would occur if ... two states of the substance should be brought together." [7] These views latter developed, beginnining with his 1876 memoir On the Equilibirum of Heterogeneous Substances, into the concept of free energy and reaction spontaneity, such as was discussed by Hermann Helmholtz.

Arrow of time
The idea of “time’s arrow” was developed in a course of Gifford Lectures delivered by British astronomer Arthur Eddington at the University of Edinburgh in January to march of 1927. These outlines resulted in the influential 1928 book The Nature of the Physical World, in which he devoted an eight-page section to the topic of Time’s Arrow or the relationship between entropy and time. In short, he states “without any mystic appeal to consciousness it is possible to find a direction of time on the four-dimensional map by a study of organization”. He continues “let us draw an arrow arbitrarily. If as we follow the arrow we find more and more of the random element in the state of the world, then the arrow is pointing towards the future; if the random element decreases the arrow points towards the past.” On this logic, he states “I shall use the phrase time’s arrow to express this one-way property of time which has no analogue to space.”

Then, in a few pages of discussion on changes of energy and changes in the organization of energy during various natural process, such as dropping a stone, operating a steam engine, opening a stopcock connecting one empty and one filled vessel of gases, etc., and each situations relation to the changes in the positions of the atoms and molecules involved, Eddington states that dissections of these sorts “raises organization from a vague descriptive epithet to one of measureable quantities of exact science”. Moreover, he states, “a common measure can … be applied to all forms of organization”, and that “any loss of organization is equitably measured by the chance against its recovery by an accidental coincidence”. Then in a form of over-simplified extrapolation, he states “entropy (which he defines as: the practical measure of the random element which can increase in the universe by can never decrease) is the same as measuring by the chance explained in the last paragraph”; where he adds that “only the unmanageably large numbers are transformed (by a simple formula) into a more convenient scale of reckoning.” This latter statement is likely in reference to Austrian physicist Ludwig von Boltzmann’s logarithmic formula of entropy. In conclusion, he states: [8]

“So far as physics is concerned, time’s arrow is a property of entropy alone.”

In the 1951 book Time's Arrow and Evolution, American biologist Harold Blum built further on the logic of Eddington. In his opening chapter, Blum stated, in reference to evolution and the one-wayness of events, that "science offers only one widely general principle which seems applicable - the second law of thermodynamics. He surmises, "one way of stating this law is to say that all real processes tend to go towards a condition of greater probability". This implies, according to Blum, that second law of thermodynamics points in the direction of all real events in time, although giving no indication of the speed of which they happen.” As such, he states, “it should be tempting, then, to explore the relationship between time’s arrow and organic evolution”. [9]

Space-time
In 1907, German mathematician Hermann Minkowski, realized that the special theory of relativity, introduced by Albert Einstein in 1905 and based on previous work of Hendrik Lorentz and Henri Poincaré, could be best understood in a four dimensional space, since known as "Minkowski spacetime", in which time and space are not separated entities but intermingled in a four dimensional space-time, and in which the Lorentz geometry of special relativity can be nicely represented. The beginning part of his address delivered at the 80th Assembly of German Natural Scientists and Physicians (September 21, 1908) is now famous: [11]

“The views of space and time which I wish to lay before you have sprung from the soil of experimental physics, and therein lies their strength. They are radical. Henceforth space by itself, and time by itself, are doomed to fade away into mere shadows, and only a kind of union of the two will preserve an independent reality.”

“If I am not asked, I know what time is, but if I have to give an explanation of it to someone, I do not know.”

“Place in itself has no real existence. Rather it is a creation of the mind or imagination, an individual and particular relationship, as it were, of one thing with respect to another. When one thing has taken away, then another takes its place and when this in turn is removed, its place is again filled and vise versa. Furthermore, just as ‘place’ has no real existence, neither does time.”

“I had no sense of the value of time, of my own or others, when I wrote it.”

— Willard Gibbs (c.1900), reflection on On the Equilibrium of Heterogeneous Substances

“Time is not one of the variables of pure thermodynamics.”