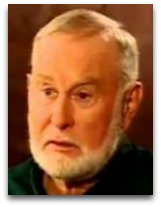 In existographies, Tom Harpur (1929-2017 ACM) was a Canadian priest, New Testament Scholar, turned journalist and 1996 Christ myth theorist, noted for his 2004 The Pagan Christ, a kind of Greenberg-like reduction of the New Testament into its Greco-Roman mythology, Sumerian mythology, and Egyptian mythology parts, i.e. monotheistic Jesus as a reformulation of the polytheistic Horus, in short.

Overview
In 2004, Harper published his The Pagan Christ, wherein he stitched out the Horus origins of Jesus. [1]

In Sep 2004, Harpur, in interview with Allan Gregg, on his The Pagan Christ, stated the following: [1]

Allen Gregg (0-0:19): You’re one of Canada’s preeminent scholars who spent virtually their entire adult life analyzing, teaching, writing about the biblical scriptures. How in the world did you come to doubt the existence of the historical Jesus of Nazareth?

Tom Harpur (0:20-2:30): Well, there’s no simple answer to that. It took a little time. It became increasingly obvious to me over the last seven [1997] or eight [1996] years, that the ‘Jesus seminar’, which had been devoted to studying ‘what are the authentic words of Jesus?’, ‘what are the authentic actions of Jesus?’, were pairing it down to smaller and smaller amounts, to the point of I think that 18 percent of what they thought he said might be authentic, and about 17 percent of what they thought he might have done might be authentic; and in the course of watching that process and realizing that Jesus was slipping away on them, and knowing myself, from my own scholarship, that there was nothing coming out of the first century at all, in the way of hard evidence, for his existence – we had the Gospels – whose dating is not quite a precise as people would lead us to believe, and only really come together fully in about 150 common era, but their origins or traditions is ‘believed’ to come out of the firs century [common era]. But, apart from Josephus, a Jewish historian, who has two interpretations, which are later forgeries, mentioning Jesus Christ, we have nothing from the first century.

This is why there was such a hoo-fer-rah about finding the supposed ossuary of James, the supposed brother of Jesus [that we had at the Royal Ontario Museum], and all the scholars happen to be here, everybody was beside themselves, because here, for the first time, in this little box, there was bones, they thought they had something from the first century, that was outside of [Josephus]. But that went up into seer smoke and flames once they got down into looking at it and realizing it was a forgery. So I realized there was very little in regards to evidence – and I’m interested in evidence. If it’s going to be history, let’s have evidence. The funny thing was, was that the farther the Church got away from the supposed time of Jesus’ life, the more sure it became of what went on!? The closer it got, to that supposed time, the more vague it became. It’s the very reverse of what happens with any truly historical person.

Tom Harpur (2:36-3:59): This is still to continue your answer to your original question. At this point, about three years ago, was sent, by a chap [Larry Marshall], who I didn’t know (he was a United Church Clergyman), some material [on Alvin Kuhn] – he said ‘I think you should look at this material’ – and when I started to look at it, I realized that I was looking at a payload of facts, of evidence, that I had never seen in my life before. And as I examined this, at first, I thought it can’t be, but as I went on, I realized accumulatively it was proof that prior to the third or fourth century, that Christianity had been very different than the way it was after Constantine, the Council of Nicaea, and the fourth century. A big change had taken place. In the course of that change, a story which had once been a universal pagan myth, belonging to the Greeks, before that to the Sumerians, and particularly to the Egyptians, that that myth had been clad in Jewish form, and mad into a history, into a literal story. And that’s what striked me. When I say that that had happened and the way in which they were prepared to kill, to burn books, to destroy the evidence of it having happened, that I realized that something [untold] was really at work here!

Allen Gregg (3:59-4:29): Let’s give our views some sense of the similarities, because you go through this evidence and you say: ‘well, here’s the New Testament, that virtually everything Jesus was reported to have done, in the Gospels, from the sermon on the mount to crucifixion, was told in ancient Egyptian religious writing.’ Give us some examples, of the same kinds of stories that were being told four or five centuries earlier?

Tom Harpur (4:30-5:13): Oh, more than that, even thousands of years earlier. Yeah, this was my astonishment. When I read for the first time, a story that I had known – I used to be a professor of the New Testament – a story that had always been problematic for me, the ‘Raising of Lazarus’, which is in the fourth gospel, and is the most dramatic miracle, that Jesus is supposed to have carried out. He raised a man from the dead, that was supposed to have been dead for four days. He was really dead. When I came across that story, in all its full detail, in an Egyptian dress, in an Egyptian setting, right down to the two marries (Martha and Mary), and to the coming forth out of the tomb, in every detail, in 1700 before the common era, 17 centuries earlier, I realized I was on to something.

Allen Gregg (5:14-5:37): Those same scholars, Spong (Ѻ) and [others], were not unaware of the work of [Kuhn, Massey, Higgens] [and the others] [3], and there analysis was that these ‘stories’, these ‘myths’, that were found in Egyptian religion, and in Greco-Roman religion, simply foreshadowed the existence and coming of Jesus.

Criticism | Apologetic debunkers
In 2004, theologian W. Ward Gasque, in his “The Leading Religion Writer in Canada: Does he Know What He is Talking About?”, discussed how he sent out 20 emails to leading Egyptologists, to discern the legitimacy of Harper’s arguments, in respect to the credibility of Alvin Kuhn, and his two main Egyptologist sources, namely: Gerald Massey and Godfrey Higgins; to quote: [5]

“Not being myself an expert in Egyptian religion, I consulted those who are about their views of contribution that Kuhn, Higgins and Massey have made to Egyptology and whether they thought some of the key ideas of The Pagan Christ well grounded. So I sent an email to twenty leading Egyptologists — in Canada, USA, UK, Australia, Germany, and Austria. I noted as a sample the following claims put forth by Kuhn (and hence Harpur):

• That the name of Jesus was derived from the Egyptian “Iusa,” which means "the coming divine Son who heals or saves".
• That the god Horus is "an Egyptian Christos, or Christ .... He and his mother, Isis, were the forerunners of the Christian Madonna and Child, and together they constituted a leading image in Egyptian religion for millennia prior to the Gospels."
• That Horus also "had a virgin birth, and that in one of his roles, he was 'a fisher of men with twelve followers.'"
• That “the letters KRST appear on Egyptian mummy coffins many centuries BCE, and ... this word, when the vowels are filled in., is really Karast or Krist, signifying Christ."
• That the doctrine of the incarnation" is in fact the oldest, most universal mythos known to religion. It was current in the Osirian religion in Egypt at least four thousand years BCE.”

Ten responded; only one of which had ever heard of Kuhn, Higgins, or Massey. One anon referred to Kuhn as “fringe nonsense”. This Gasque “twenty leading Egyptologists” citation has since been a stable Christ myth debunking tool. (Ѻ)(Ѻ)

Here, secondly, we note that this is a pre-Zeitgeist (2006) era attack on the Horus-Jesus connection; the Zeitgeist push done via the work of Dorothy Murdock, citing Massey, among others.

In c.2005, religious apologeticist John Holding posted a page-by-page critique of Harpur’s The Pagan Christ, the gist of which being, the usually apologetic rebuttal, that all of Harpur’s scholars, including Wallis Budge, are bunk, and “original sources” [Pyramid Texts, Coffin Texts, Book of the Dead, Book of Thoth] aren’t exact enough; the opening of which is as follows: [3]

“Harpur's book is merely a reiteration of ‘pagan copycat’ theories. The bibliography contains many unreliable sources: Freke and Gandy, Acharya S [Dorothy Murdock], Tim Leedom, T. W. Doane, Earl Doherty, Helen Ellerbe, Kersey Graves, John Spong, Godfrey Higgins, Gerald Massey, Alvin Kuhn. These last three (in reverse order) are Harpur's most favored sources; throughout Harpur expresses bewilderment that these three "scholars" (the word he applies liberally to just about anyone, regardless of credentials), especially Kuhn, have been so vastly ignored. The idea that they have been ignored because they are not competent scholars does not occur to Harpur.”

In 2006, Stanley Porter and Stephen Bedard published Unmasking the Pagan Christ: An Evangelical Response to the Cosmic Christ Idea, in an attempt to debunk Harper. [6]

Education
In 1951 to 1954, Harpur attended Oxford University on a Rhodes Scholarship. (Ѻ)

Quotes | Employed
The following are quotes employed by Harper:

“Almost all of the latter part of my life has been spent unlearning the nonsense I learned in my youth.”

“The Hebrew sacred books are all Egyptian in origin.”

“The Bible is a ‘total plagiarism’ of the Sumerian and Egyptian mythologies.”

“The Bible is not a document concerned with history, but a vast collection of sublime myths and metaphors.”

“There was an obvious analogy between the Horus child and the baby Jesus and the care they received from their sacred mothers; long before Christianity, Isis had borne the epithet ‘mother of the god’.”