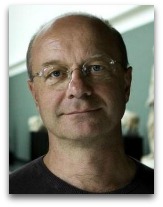 In hmolscience, Tor Nørretranders (1955-) is a Danish science author noted, in human thermodynamics, for his 1991 book The User Illusion: Cutting Conscious Down to Size, wherein he attempts to explain consciousness in terms of thermodynamics and an external force type theory or argument.

Overview
The gist of Norretrander's consciousness theory seems to be captured by Irish physicist James Maxwell's 1879 final year comment, supposedly in regards to "who" actually wrote his famous "Maxwell's equations" of electrodynamics (Boltzmann having stated that he thought them to have been written by a god), to Irish theological editor Fenton Hort, that: [1]

“What is done by what is called myself is, I feel, done by something greater than myself in me.”

This comment, according to Norretranders, has roots in Maxwell's 1856 poem, written shortly after his father's reaction end, wherein he states:

“Powers and thoughts within us, that we/know not, till they rise/Though the stream of conscious action from where the/Self in secret lies.”

Which, in turn, seems to find corroboration in Maxwell’s famous 1847 (age 16) comment that:

Thermodynamic depth
In his 2002 The Generous Man: A Natural History of the Trouble Image Gives, he outlines an evolutionary psychology interpretation of thermodynamic depth, loosely translated as the thermodynamic measure of the unspoken signals associated with the energetic value and history of the cost of producing a given product, such as the peacock’s tail or a classic poem, and sexual attraction. [2] Nørretranders’ books and lectures in the last few years have primarily been focused on science and its role in society, often with Nørretranders' own advice about how society should integrate new findings in science. He is currently the adjunct professor of the philosophy of science at Copenhagen Business School, a position he has held since 2003.

Quotes | Cited
The following are quotes employed by Norretranders:

“The atoms that are in the brain are being replaced; the ones that were there before have gone away. So what is this mind of ours: what are these atoms associated with consciousness? Last week’s potatoes! They now can remember what was going on in my mind a year ago—a mind which has long ago been replaced. The think I call individuality is only a pattern or dance, that is what it means when one discovers how long it takes for the atoms of the brain to be replaced by other atoms.”