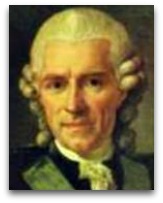 In existographies, Torbern Olof Bergman (1735-1784) (IQ:180|#163) (Partington 50:31) (GCE:24) [CR:21] was a Swedish chemist noted for the publication of his 1775 textbook A Dissertation on Elective Attractions, which contains what has come to be called "Bergman's affinity table", a 59-column 50-row affinity table, the largest ever assembled, and "Bergman's affinity reaction diagrams". [1] The table was an expanded and advanced version of French chemist Étienne Geoffroy's famous 1718 affinity table. [5]

Bergman was the first to represent individual chemical species generically using letters, A or B, and to represent combined species (bonded species) using adjacent letters, as in AB; the latter of which is the prototype to the notion of the chemical bond. [6]

Bergman's textbook later served as a foundation for German polymath Johann Goethe's theories on human chemical affinities as outlined in his 1809 publication Elective Affinities, the founding book of the science of human chemistry. [2] In particular, a year before publication Goethe, who had been studying chemistry for a period of forty-years, told his friend Riemer that ‘his idea for the new novella was to portray social relationships and their conflicts symbolically’, as in a, b, ac, abd, abcd, etc., a statement in reference to a Scottish physician and chemist William Cullen’s 1757 pioneering development of affinity reaction diagrams (of which 64 such diagrams were made in Bergman's textbook):

in which, for instance, as diagrammed above, if chemical species A and B are attached in a weakly bonded chemical union, signified by the bonding bracket “{“, ordered such that if species C were introduced into the system, the greater affinity preference of A for C would cause A to displace B and to thus form a new union with C, which equates to the following in modern terms:

and that furthermore, according to Goethe: [3]

“The moral symbols used in the natural sciences were the elective affinities discovered and employed by the great Bergman.”
In other words, what is moral or amoral, in Goethe’s view, is a point of view inherent in the laws of chemistry according to which species react.

Education
Influenced by his parents, Bergman initially studied theology and philosophy but in secret also mathematics, physics and astronomy. Bergman's broad interest in the natural sciences also brought him in contact with Carl Linnaeus, who became his teacher, who became convinced that Bergman had a great talent for entomology. Linnaeus's famed classification scheme was said to be the inspiration for Bergman creation of similar binomial Latin names like acidum aereum for OCO in 1773 and scores of base + acid-adjective combinations like argentum natratum (AgNO3), calx aerata (CaCO3), cuprum saltium (CuCl2), and zincum vitriolatum (ZnSO4) in 1775. [6]

Between 1754-1757 Bergman finished his dissertations in astronomy and physics. The latter achievement rendered him a senior lectureship in physics. In 1764 the newly elected member of the Swedish Academy of Sciences found himself in a quandary about the choice for his inaugural speech. To general astonishment he chose: "The possibility of avoiding the deleterious effects of thunder".

In 1767 a vacancy occurred for the professorship in chemistry at Uppsala University. Bergman's application for the chair only one work in chemistry was included. Fortunately for chemistry Bergman nevertheless obtained the position thanks to the personal intervention by King Gustav III on Bergman's behalf. Within a few years Bergman was established as one of the leading chemists in Europe. His zest for research was immense. Moreover he was a very distinguished teacher. As has been shown, Bergman's scientific contributions were strongly connected with analytical chemistry. [4]