In terminology, trust is assured reliance on the character, ability, strength, or truth of someone or some thing. [1]

Overview
In 1956, in the wake of the 1953 “Red Atheism Scare”, the US Congress passed the H. J. Resolution 396 act, which replaced the 1782 E pluribus unum or “Out of Many, One” national motto with "In God We Trust" as the official motto of the US, and changed the one dollar bill, the following year, as follows: 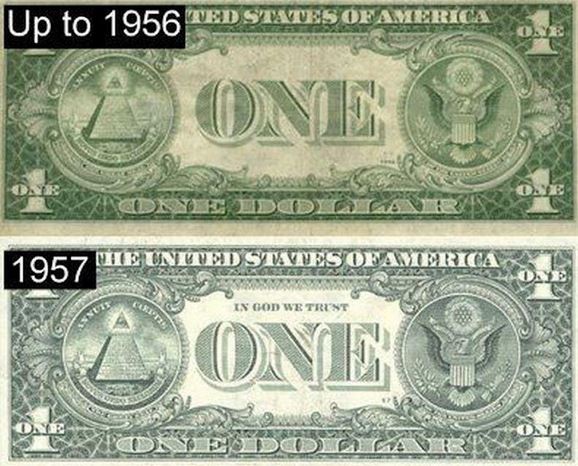 In circa 2013, Libb Thims was water-testing the phrase "In ΘΔics we trust" on the main page of Hmolpedia, in place of the religious-based one:

This meaning, in effect, that the modern physicochemical thinker, e.g. Henry Adams:

“Who can be trusted to tell me whether my technical terms are all wrong?”

— Henry Adams (1908), complaint to his brother Brooks Adams, after months of searching for a physicochemical proof-reader [see: Henry Bumstead] for his social phase theory of history [2]

puts his or her "trust" in thermodynamics, more so than they do in belief in the existence of god. 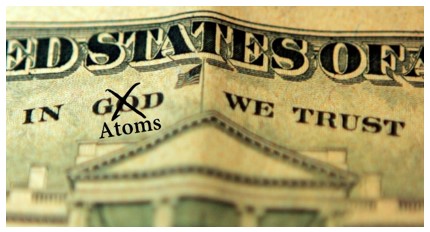 In c.2017, the Freedom From Religion Foundation, in their tweeter banner (Ѻ) and bumper stickers, was using, the following, below left, "in reason we trust" credo motto shown on pennies:

In 2019, FFRF.org made the following parody cartoon (Ѻ)(Ѻ) about a substitute teacher who goes into a Missouri school and crosses out “in god we trust” on the chalk board, shown with books by: Charles Darwin, Robert Ingersoll, Madalyn O’Hair, Christopher Hitchens, Julia Sweeney, and some imaginary “FFRF book” as new reading material: 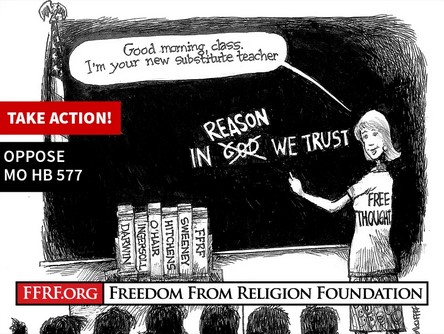 Joke | Parodies
The following is a 2016 atheist reddit icon image parody of Bertrand Russell’s 1952 teapot (Ѻ) disproof of the existence of god.

“We must trust nothing but facts: these are present to us by nature, and cannot deceive.”

“Supposing there was no intelligence behind the universe, no creative mind. In that case, nobody designed my brain for the purpose of thinking. It is merely that when the atoms inside my skull happen, for physical or chemical reasons, to arrange themselves in a certain way, this gives me, as a by-product, the sensation I call thought. But, if so, how can I trust my own thinking to be true? It’s like upsetting a milk jug and hoping that the way it splashes itself will give you a map of London. But if I can’t trust my own thinking, of course I can’t trust the arguments leading to atheism, and therefore have no reason to be an atheist, or anything else. Unless I believe in god, I cannot believe in thought: so I can never use thought to disbelieve in god.”

— C.S. Lewis (c.1950), an argument for the existence of god (Ѻ); supposedly has something to do with Lewis’ earlier “argument from reason”, defended in his 1947 Miracles: a Preliminary Study, wherein he cited John Haldane’s 1927 quote: “If my mental processes are determined wholly by the motions of atoms in my brain, I have no reason to suppose that my beliefs are true ... and hence I have no reason for supposing my brain to be composed of atoms.” [4]

“Fire and wind come from the sky, from the gods of the sky, but Crom is your god. Crom, and he lives in the earth. Once giants lived in the earth, Conan, and in the darkness of chaos, they fooled Crom, and they took from him the enigma of steel. Crom was angered, and the earth shook, and fire and wind struck down these giants, and they threw their bodies into the waters. But in their rage, the gods forgot the secret of steel and left it on the battlefield, and we who found it. We are just men, not gods, not giants, just men. And the secret of steel has always carried with it a mystery. You must learn its riddle, Conan, you must learn its discipline, for no one, no one in this world can you trust, not men, not women, not beasts... This you can trust. [points to his sword].”

— Robert Howard (1982), Conan the Barbarian; explaining the mystery of steel to Conan; written by John Milius and Oliver Stone, based on the character Conan created by Robert Howard (Ѻ); thematic to Friedrich Nietzsche and Scarface (1983) dialogue

“Whether it was the worldwide flood, the feeding of the 5,000, or arguing against the possibility that man evolved from molecules to ape to man over millions of years, dad defended the word of God as if his life depended upon it … which, in fact, it did. He was always adamant about one thing: if you can’t trust the Book of Genesis as literal history, then you can’t trust the rest of the Bible.”

“Since the Bible and the church are obviously mistaken in telling us where we came from, how can we trust them to tell us where we are going?”

“Never trust the work of a Templeton Prize winner or associate.”

— Libb Thims (2013), mental note arisen in reflection of recent adds to Paul Davies page; along with past thought on other Templeton-funded writers: Robert Ulanowicz, Terrence Deacon (Ѻ), among others, whose mind[s] has gone to pasture, i.e. left the path of truth for sake of spiritual/God theory justification aiming/biased funding, 10:09 AM CST, Dec 9.