In hmolscience, two cultures calls refers to historical and or modern calls for the world’s leading universities and educational systems to implement a two cultures namesake course, readership, chair and or university department, seen as a growing and pressing need, that teaches students—natural science and social science students combined—the basics of social physics, pure and applied (Florence Nightingale, 1874), what the Clausius inequality and Romeo and Juliet have to do with each other (C.P. Snow, 1959), themed around a sociology based on chemistry (Werner Stark, 1962) or physicochemical sociology (Mirza Beg, 1987) as modern physical science defines things.

List | Classical
The following is a work-in-progress chronological listing of some of these calls, statements of pressing need, and desires to study and or complete degrees and do research the general field of the physicochemical humanities:

Poudel-Galem-Thims | Discussion
On 30 Jun 2016, amid lunch discussion, between Ram Poudel, Serge Galam, and Libb Thims, on the outside patio of Italian Pizza Kitchen, across from Days Inn (conference hotel), following the end of the three-day BPE 2016 conference: 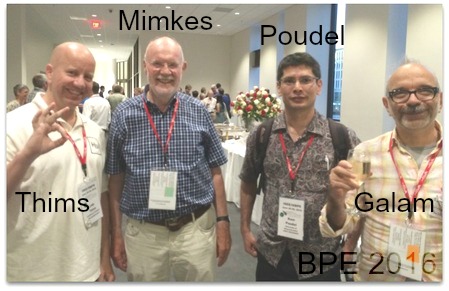 Poudel, with an MS in mechanical engineering, who for the last ten years, at Pulchowk Campus, Institute of Engineering, Tribhuvan University, Nepal, has been teaching thermodynamics, and since 2014 has been jointly working, at University of Massachusetts, Amherst, towards completion of his PhD on a social field theory and or thermodynamics based poverty-focused economics dissertation, asking Galam and Thims about potential PhD supervisors and or committee members possibilities.

Galem explained that last year he had began teaching a sociophysics-based politics class (of 120-students), at the Paris Institute of Political Studies (Sciences Po (Ѻ)), e.g. see his: 2015 “Doctoral Seminar: Do Humans Behave Like Atoms? An Unfortunate Answer from Sociophysics” (Ѻ) (adjacent) — if he was in need of an assistant, or would be willing to supervise, sign off, and or be a committee advisor for his PhD dissertation, or something to this effect. Galem, however, explained that either he, his department, or something to this effect, is not in the position to facilitate PhDs of this sort, or something to this effect; as he only started teaching his physics-based politics is a course only started last year, and it is still a relatively new field of inquiry.

Thims, to note, pointed out to Galam that the US constitution, via the Princeton School of Social Physics, in particular the mind of James Madison, was conceptualized in terms of Newtonian physics-based politics; Thims directed Galam to the appropriate reading material advisable for his students to read, to get historical framework for a course in physical politics.

Poudel, Galem, and Thims then began ruminating on the matter. Thims, e.g., told Poudel that he could have done the PhD under Jurgen Mimkes, who ferried two masters degrees in physical-thermodynamical socioeconomics at the University of Paderborn, German, but that he is retired now. Poudel stated that he wanted to complete his PhD in the US, but that he was not for sure that he could complete his PhD at his present research position at University of Massachusetts, Amherst, as his supervisors were not academically equipped (thermodynamically) to sign off on such a PhD, or something to this effect.

Thims suggested the following potential PhD supervisors for Ram Poudel to finalize his 2014 to present work on a thermodynamics based social field theory dissertation:

2. James Ferri | Lafayette College, Pennsylvania, chemical and biomolecular engineering department | Thims’ proposed Ferri as a candidate, being that (a) he had already supervised undergraduates in this area (“Thermodynamics of Wall Street”, 2011), and (b) as head of the chemical engineering department, at Lafayette College, Pa, he would be able to guide Poudel through equation 133.

3. Kalyan Annamalai | Texas A&M, mechanical engineering department | Thims suggested Annamalai as potential PhD supervisor, being that Annamalai was already citing Thims human molecular formula (2002) in his 2011 Advanced Thermodynamics Engineering textbook, as the new definition of a human, as pointed out in slide #8 (Ѻ) of Thims’ BPE 2016 talk, and that Annamalai is a JHT review board member. Thims pointed out, however, that Annamalai may not be technically proficient enough to steer him correctly, along the lines of equation 133, such as taught to Paul Samuelson by Edwin Wilson in his Harvard University “mathematical economics” course.

4. Two advisor system | Korea University | Since 2011 (Ѻ) in the “Sociology of Science” section of their Science and Technology graduate program, they have been offering (Ѻ) a general systems theory based social thermodynamics seminar (SOS 623) course); the PhD student has to have one humanities and one physical science advisor.