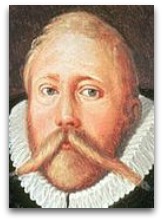 Copernicus
In c.1485, Brahe, one of Copernicus' greatest admirers, sent his assistant to Frombork to purchase the triquetrum owned and used by Copernicus, so that he could better understand how he went about making his observations.

Brahe model
In 1588, Brahe published a geoheliocentric model, aka "Tyconic system"; which is summarized as follows: [3]

“Shortly after the observations of the comet of 1577-78, Tycho developed his own model of the heavens. He called it his Tyconic system, and it was essentially a hybrid of the systems of Copernicus and Ptolemy. His geoheliocentric system called for a perfectly still earth (it did not rotate) to be the center of the universe, with the planets (mercury, venus, mars, jupiter, and saturn) revolving around the sun. The sun, moon, and fixed stars revolved around the earth, as in Ptolemy's conception. Brahe never fleshed out his model the way Copernicus did, but he described it in a book published in 1588, De mundi aetherei recentioribus phaenomenis.”

The following is the conceptual model of the universe envisioned by Brahe in 1590:

“What need is there, without any justification, to imagine the earth, a dark dense and inert mass, to be a heavenly body undergoing even more numerous revolutions than the others, i.e. subject to triple motion, in violation of not only of all physical truth, but also of the authority of holy scripture, which ought to be paramount.”

“For those [observations] that I made in Leipzig in my youth and up to my 21st year, I usually call childish and of doubtful value. Those that I took later until my 28th year [i.e., until 1574] I call juvenile and fairly serviceable. The third group, however, which I made at Uraniborg during approximately the last 21 years with the greatest care and with very accurate instruments at a more mature age, until I was fifty years of age, those I call the observations of my manhood, completely valid and absolutely certain, and this is my opinion of them.”