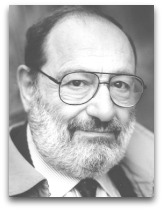 In existographies, Umberto Eco (1932-2016) (IQ:#|#) [RGM:308|1,500+] (CR:2) was an Italian novelist, literary critic, philosopher, and semiotician, noted in genius studies culture for having the third-largest personal library in history, said to contain 30,000 to 50,000 books, influential to influenced Nassim Taleb, noted for generally for his 1980 The Name of the Rose, which is ranked by some (Ѻ) alongside Dan Brown’s The Da Vinci Code and Graham Hancock’s Fingerprints of the Gods.

Overview
In 1980, Eco published his The Name of the Rose, which is ranked by some (Ѻ) alongside Dan Brown’s The Da Vinci Code and Graham Hancock’s Fingerprints of the Gods.

Library
Eco, of note, presently is ranked as having the third-largest personal library in history, said to contain 30,000 to 50,000 books; multiple videos (Ѻ)(Ѻ) of which exist.

Quotes | By
The following are quotes by Eco:

“Epistemological thinkers connected with quantum methodology have rightly warned against an ingenuous transposition of physical categories into the fields of ethics and psychology (for example. the identification of indeterminacy with moral freedom). Hence, it would not be justified to understand my formulation as making an analogy between the structures of the work of art and the supposed structures of the world. Indeterminacy, complementarity, noncausality are not modes of being in the physical world, but systems for describing it in a convenient way. The relationship which concerns my exposition is not the supposed nexus between an "ontological" situation and a morphological feature in the work of art, but the relation between an operative procedure for explaining physical processes and an operative procedure for explaining the processes of artistic production and reception. In other words, the relationship between a scientific methodology and a poetics.”

“Adso: ‘But how does it happen’, I said with admiration, ‘that you were able to solve the ‘mystery of the library’, looking at it from the outside, and you were unable to solve it when you were inside?’ William of Baskerville: ‘Thus, god knows the world, because he conceived it in his mind, as if from the outside, before it was created, and we do not know its rule, because we live inside it, having found it already made’.”

“I'm afraid that, by now, it might actually be 50,000 books. When my secretary wanted to catalogue them, I asked her not to. My interests change constantly, and so does my library. By the way, if you constantly change your interests, your library will constantly be saying something different about you. Besides, even without a catalogue, I'm forced to remember my books. I have a hallway for literature that's 70 meters long. I walk through it several times a day, and I feel good when I do.”