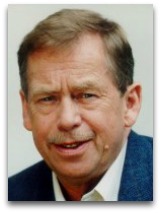 In science, Vaclav Havel (1936-) is a Czech playwright and former Czechoslovakian president noted for his 1986 quote on entropy as struggle to evolves, or something along these lines.

Overview
In 1986, Havel, in his “Letter to Dr. Gustav Husak”, stated the following now-popular entropy quote: [1]

which is a variant of the original 1886 version by Austrian physicist Ludwig Boltzmann. [2]

Education
From around the time Havel was seventeen, he was tutored privately in philosophy by Czech sociologist Josef Fischer, a friend of the family, who would often present Havel with a long list of books to read. [4] Fisher during this period was said to have been working to develop a fourth law of thermodynamics. Fischer significantly influenced Havel, which is likely from where Havel likely learned about entropy. [3] Into the 1950s, entered into a four-year apprenticeship as a chemical laboratory assistant and simultaneously took evening classes; he completed his secondary education in 1954. Havel then studied economics at the Czech Technical University in Prague from 1955 to 1957.

Related
Another head of a country to use thermodynamics in application to human existence, was Iranian Prime Minister Mehdi Bazargan.