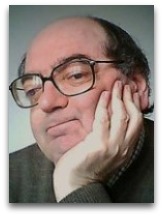 In hmolscience, Valter Caggio (1954-) is an Italian mechanical engineer noted, in human thermodynamics, for 2004 to present publications on an effort to stitch out an entropy-themed theory of global meaning.

Overview
In 2004, Caggio seems to have been working on an entropy-based theory of global meaning, promoting his views on a number of multi-language sites: Negentropy.us (2007), Negentropie.com, and Negentropia.com. Caggio defines negentropy as ‘an order factor or vital renewal for living beings’. [2]


In 2008, Caggio, in his Negentropy and its New Global Meaning, applies the negentropy concept to the various subjects of the humanities, ethics, politics, and religious models, using a negentropism-style of argument. [1] Caggio makes mention of Ilya Prigogine, and his Nobel Prize, Erwin Schrodinger, and his 1944 What is Life?, Rudolf Clausius, and his 1865 The Mechanical Theory of Heat, and Leon Brillouin, and his 1964 Scientific Uncertainty and Information, but all only in superficial loose passing or namesake.

Difficulties
A few downsides of his work are (seem) that: (a) his writing style is very unprofessional looking in terms of structure, style, feeling, and layout, e.g. half the text of the book is bolded, the Italian-to-English translation is lacking in cleanness, there’s multitudes of rows of dotted lines and triple asterisks all over the place, etc.; (b) he mixes in a large amount information theory into his discussion, assuming Shannon entropy and Clausius entropy are the same; and (c) there is no derivation of negentropy, he simply jumps into a long entropology-style treatise on how he believes negentropy applies to the humanities, meaning that his underlying understanding of thermodynamics is lacking.

Education
Caggio states that he is or has worked in technical and managerial roles in industry; is or has taught at various colleges in Italy; along with having a free professional engineering course. He is a professor emeritus of Superior Tech Institutes.