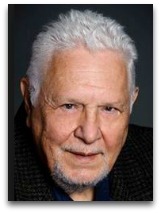 In human thermodynamics, Victor Stenger (1935-2014) was an American physicist noted for his 1995 "entropy per unit volume" argument of how life or order formed starting from the big bang in a universe tending towards maximal entropy or what Stenger equates to maximal disorder. [1]

In 2003-2007, Stenger expanded on his earlier entropy of the universe augments to disprove the existence of God scientifically, by arguing that the universe at the start of the big bang existed not in a low entropy state, as is commonly stated, but rather in a state of maximum entropy (per unit volume) and in a state of zero energy, the latter view loosely derived from Stephen Hawking. [2]

Atheism
In the mid-2000s, Stenger was an atheism advocate, the following being one of his more famous quotes (see: atheism timeline).

Roemer
Interestingly, one of Stenger, in his final days, was posting up in Google Groups, about the so-called “Roemer-Styer fiasco”, on the rather peculiar and unusually over-zealous efforts of David Roemer, 2008-present, to get the 2008 article “Entropy and evolution”, by American physicist Daniel Styer, retracted from the American Journal of Physics, the following, e.g., being a 2 Jun 2014 response letter from New York Senator Kirsten Gillibrand to Roemer about his concerns. (Ѻ) Among the 21 email recipients to the forward of this scan/fax, Stenger aside, include: Libb Thims (two emails) and Fred Wolf.

Education
Stenger completed his BS in electrical engineering in 1956 from Newark College of Engineering, and MS in physics (1958) and PhD in physics (1963) at UCLA. Stenger was a professor of physics at the University of Hawaii until his 2000 retirement.

Difficulties on theory
Two salient difficulties on Stenger’s big bang thermodynamics models are firstly his unassuming equation of entropy with disorder, which is only a statistical mechanical approximation (Boltzmann-Planck approximation of Boltzmann chaos assumption) valid only in certain cases and under certain types of entropy change, and secondly his definition of the universe as a “closed system”, which technically means a system surrounded by a boundary across which energy, in the form of work or heat, but not matter may pass. On the latter terminology, it is likely “isolated system” to which Stenger meant to define the universe (a common slip), as there do not exist any known theories that purport the universe to be being acted on by transfers or passages of energy, heat, or work (aside from fringe wormhole theories, parallel universe theories, or multiverse theories, etc.).
-
Quotes | By
The following are quotes by Stenger:

“Modern physics, including quantum mechanics, remains completely materialistic and reductionist while being consistent with all scientific observation.”

“As a physicist who had never seen the hand of god in any observable phenomena, I view the scientific rejection of the soul as the ultimate validation of reductionist material monism.”