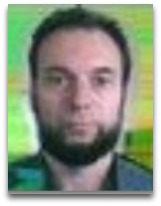 In human thermodynamics, Viktor Albertovich Minkin (c.1959-) is a Russian biometrist notable for his work in the application and development of human thermodynamic theory, beginning in 2007, with the connective use of various technologies, particularly vibraimage and fingerprint analysis, to the quantification of states of human molecules. [1]

Minkin has a BS in Measurement and Information Technologies and a MS in Photosensitive Devices. He has spent over twenty years in the development and study of dermatoglyphics and software applications on the calculation of extrovert/introvert levels and left/right brain hemisphere levels according to fingerprints.

Human thermodynamics
In 2007, Minkin began to consider the combination of human emotional state quantification computerized technologies, such as computational dermatoglyphics pixel vibration rate video image processing (vibraimaging), with the sciences of human chemistry and human thermodynamics, to the further understanding and analysis of human-human compatibilities in family and business. In February of 2007, Minkin stated, in commentary on American chemical engineer Libb Thims’ Human Chemistry (Volume One), that “at first, (Thims) theory looks strange, but after time, following further thought and understanding, I did not find any arguments against it … if we have rules for molecular behavior, why not adapt these molecular terms for human behavior; moreover, until human thermodynamics, there had never been a direct link between fingerprints, which reflect the character and health of a person, and DNA – this phenomenon can now be explained”. [2]

References
1. (a) Minkin, Viktor A., Gladyshev, Georgi P., and Thims, Libb. (2007). “Head Movements Vibraimage Visualization and Energetic Models of Emotions.” ELSYS Corp. publications.
(b) Minkin, Viktor A. (2008). “Fingerprints and the Thermodynamics of Human Development.” Journal of Human Thermodynamics, Vol. 4, Issue 2, pgs. 8-10, June.
2. (a) email communication between Minkin and Thims (Friday, February 09, 2007) in commentary on a review of the first five chapters of manuscript of Thims’ Human Chemistry.
(b) Comment as found on pg. x of Thims’ Human Chemistry (Volume One).
3. PsyMaker.com – Internet shop psymaker.

Further reading
● Minkin, Viktor, A. and Nikolaenko, N.N. (2008). “Application of Vibraimage Technology and System for Analysis of Motor Activity and Study of Functional State of Human Body”, Biomedical Engineering, Vol. 42, No. 2, pgs. 196-200.