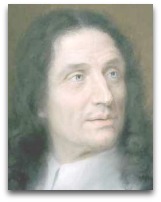 In existographies, Vincenzo Viviani (1622-1703) was an Italian mathematician and scientist, noted for []

Galileo
In 1639, Viviani, aged 17, became the assistant of Galileo, remaining his disciple until Galileo’s end on 8 Jan 1642.

Torricelli
In 1632 to 1640, the location of Evangelista Torricelli, supposedly, is unknown; presumably he was secretary to Galileo’s friend Giovanni Ciampoli.

On 10 Oct 1641, Torricelli, aged 33, at the invitation of Galileo, joined Galileo and Viviani in Galileo’s home, thereafter becoming Galileo’s four month "pupil", so to say, and university chair successor, thereafter. [1] Viviani then succeeded Torricelli as mathematician to the Medici court. (Ѻ)

Both Viviani and Torricelli, generally are classified as disciples or students of Galileo, each with different mathematical focuses. (Ѻ)

Mercury experiment
The famous Torricelli vacuum experiment (1643), seems to have been designed by Torricelli, but “constructed” (Ѻ) and or “performed” (Ѻ) by Viviani; other views on this are as follows:

“Torricelli communicated this reasoning to his friend Vincenzo Viviani who, anxious to see the operation, soon had the instrument made and, procuring quicksilver, was the first to make this noble experiment, and to see the effect foretold by Torricelli.”

“And it is my belief that the same result will follow in other liquids, such as quicksilver, wine, oil, etc., in which the rupture will take place at a lesser or greater height than 18 braccia, according to greater or less specific gravity of these liquids in relation to that of water, reciprocally; always measuring such heights perpendicularly, however.”

— Galileo (1638), corrections made by Vincenzo Viviani, with the approval of Galileo, to the Leiden edition of Discorsi; cited by William Middleton (1964) in The History of the Barometer (pg. 20)

“Galileo is believed to have been one of the first to suggest an experiment that tested the relationship between the density of the liquid and the height of the column. The liquid of choice was liquid mercury (quicksilver). Mercury has a density 13.5 times that of water and it is one of the few metals that is a liquid at room temperature. Although Galileo is often credited with the idea, after Galileo's death it was Viviani who suggested the experimental design to a former student of Galileo, Evangelista Torricelli. In 1644, Torricelli designed a device to test the effects of air pressure on liquid mercury.”