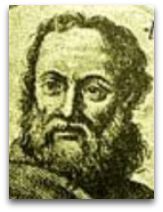 In existographies, Marcus Vitruvius (c.75-15BC) (IQ:165|#439) (Murray 4000:7|T) (CR:5), aka "Vitruvius", was a Roman writer, architect, engineer, civil and military, and philosopher, and influence to Leonardo da Vinci, noted for []
Vitruvian model
In 25BC, Vitruvius, in his On Architecture (De Architectura), in which he hinted at correlations of the ideal geometrical proportions of a human, later used by Italian polymath Leonardo da Vinci in the construction of his famous Vitruvian man. [1] The following is an artistic rendition of Vitruvius' geometrical man, from his On Architecture: 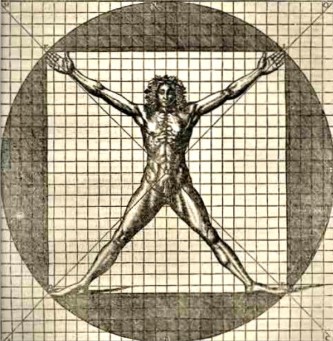 Vitruvian man model was used famously Italian polymath Leonardo da Vinci's depiction of his ideal geometrical human, the Vitruvian man; which was later used as the the depiction of the generic ‘human molecule’ by Americans chemical engineer Libb Thims, in The Human Molecule (2008), and later by writer John Hodgson, in molecules humans (2010). [2]

Quotes | On
The following are quotes on Vitruvius:

“Vitruvius was the first practicing engineer whose writings are extant.”

“Vitruvius had described the pump of Ctesibius with great care, and Vitruvius’ writings, printed in 1486, had been among the earliest works to appear in print.”

“Such as possess the gifts of fortune are easily deprived of them: but when learning is once fixed in the mind, no age removes it, nor is its stability affected during the whole course of life.”

“Thales [and others] and Democritus of Abdera handed on their discoveries of the laws according to which natural events are ordered and have their effects. Relying on their discoveries Eudoxus, Aratus and others devised the method of calendars to show the rising and setting of the stars and the significance of the seasons and handed it on to their successors.”