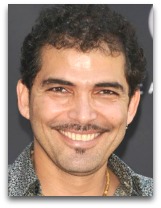 In existographies, Vladimir Cruz (1965) is a Cuban writer, actor, and producer noted for his 2010 film Afinidades, co-directed with civil engineer turned actor Jorge Perugorria, a modern day remake of Goethe’s Elective Affinities, with focus on the growing existentialist void of modern scientifically-literate man, in the wake of the loss of values in Cuba, and Goethe’s human chemical theory, or something along these lines, the plot of which is structured around Reinaldo Montero’s 2004 novel Chamber Music (Musica de Camara). [1]

Bruno | Captain
Cruz, in Afinidades, plays the role of Bruno, a theoretical physicist working in a chemical factory run by Nestor his boss; each character shown below and labeled according to the Goethe lettering scheme:

Quotes | About
The following are related quotes:

“The film [Afinidades] takes place inland on fresh water and its time is quite different from what we are used to in our contemporary cinematography. We are only trying to meditate about the human being and their complexities, facing emptiness and the lack of rational explanation for many of the problems of the contemporary world, sometimes appearing that the only way out is to take refuge in instincts. Those instincts lead to sex. At least this is the way out that the protagonists of this story find: sex as a way of electric discharge so as to keep themselves alive, the manipulation of others as a way to cast out impotence and reaffirm personalities lacerated by loneliness. But the result is ephemeral and the attempt has unforeseeable consequences.”