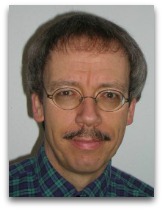 In hmolscience, Volker Wiskamp (c.1957-) is a German organic chemist noted for his 2002 article “Chemistry in the Work of Goethe”, wherein he discusses German polymath Johann Goethe’s 1809 physical chemistry based novella Elective Affinities (along with his 1832 novel Faust) in chemical thermodynamic terms, in particular he equates exothermic to “hot love” and endothermic to “cold love” in the connection to the enthalpy of formation (see: human enthalpy), which is a very rarely-made connection in human free energy theories (see: Elective Affinities | IAD: equation decipherment).

Chemistry in the Work of Goethe
In circa 1997 to 2002, Wiskamp was involved an interdisciplinary teaching effort at a high school in Darmstadt, Germany, wherein the class, of 16-year-old pupils, watched and discussed the theory and philosophical implications of Goethe's Elective Affinities. The class, in part, was a stimulated precipitate of the release of the 1996 film Le affinità elettive, the French-Italian rewrite of Goethe’s Elective Affinities by the brothers Paolo Taviani and Vittorio Taviani, which was shown as part of a high school chemistry class and classroom discussion that resulted.

In 2002, Wiskamp, collected the results of the noted and discussion of the class into an online article “Chemistry in the Work of Goethe”, in which he discusses the chemical thermodynamics of Goethe's Elective Affinities, a subject very rarely touched upon. Wiskamp explains the origin of the article as follows: [3]

“The website was written approximately 10-years ago, but it has not been published in any journal. 10-15 years ago, I had a cooperation with a high school in Darmstadt. One focus of that cooperation was to bring different fields of teaching together. At that time Goethe’s novel ‘affinities’ was discussed in the German class and the 16-year-old pupils watched an Italian movie on Goethe’s novel. The chemical aspects in that novel were discussed in the chemistry class and analogies between chemical interactions and human interactions, especially love, were worked out. The text which I put onto my website is the result of that class, a class report, so to say. A few years later I was involved in a similar project which had the focus on science and religion.”

“Edward introduces the concept of elective affinities between chemicals. He means that substances then obviously preferable to one another, particularly when a lot of latent heat is released. The thermodynamic sense, Edward speaks of enthalpy of formation, ΔH, especially the exothermic (hot love) chemical reactions. Charlotte finds that a chemical reaction takes place only when the opportunity arises. It compares that there is theft only if there is something to steal, and also handy for the thief is ready. It describes so clearly that the position of a chemical equilibrium depends crucially on the concentrations of the reactants (mass action). Extremely formulated: Come marble not contacted with sulfuric acid, so there are neither gypsum nor carbon dioxide; Otto and Ottilie were not published, the marriage of Charlotte and Edward would not have been compromised. Maybe thinks Charlotte, when she speaks of occasions, other boundary conditions, which can change a marriage, for example, homely, financial, medical or social, similar to e.g. the temperature on the rate of a chemical reaction and the setting of the chemical equilibrium has a significant influence. Otto says that is the course of a chemical reaction by a higher purpose.

The chemist knows that the driving force of a chemical reaction by the Otto speaks, on the one hand depends on the heat of reaction (exothermic or endothermic), on the other hand but also of temperature and entropy of a measure of the disorder of the system, after the second law of thermodynamics, which states that the system strives toward a maximum, with the motto: the chaos is increasing.

The reaction of calcium carbonate with sulfuric is entropy-controlled especially because with the carbon (IV) oxide is a reaction product escapes from the mixture (chaotic) in the disordered gas phase. Even with the mutual relations of the four main characters in his novel all ends in chaos. Now the behavior of calcium carbonate and sulfuric acid is fully with the relationship between Charlotte, Edward, Otto and Ottilie comparable? If so, do adultery as the most natural thing in the world and are considered practically the above-cited law of science meet. But Charlotte is really a soulless carbonation, Edward etc. a soulless calcium? Are not the self-re-fall in love and committing adultery not only solved with old friends and new ones and creates a lot of chaos, but also feelings of hurt people? Therefore need not even be considered laws that go beyond the purely scientific? For example, those who long ago brought an old man of the mountain and down the sixth of which is: Thou shalt not commit adultery! Goethe asks this question in his novel also. Describe the natural sciences with its laws is the only truth, or are there other levels of reality, we only guess, but (still) do not know?”

Regarding the "Thou shalt not commit adultery!" comment, see the Goethe timeline (29 Jan 1830) for Goethe's comments to his friend composer Carl Zelter (1758-1832) on the relation of this commandment and the novella.

Of note, Wiskamp, whose focus is on chemical education, gives end-of-article laboratory experiments, contextually related to the novel.

Education
Wiskamp completed his BS in chemist in 1979 at Ruhr-University Bochum and his PhD in 1981 at the Max Planck Institute for Coal Research in Mulheim-Ruhr after which he worked as a postdoctoral fellow at UC Berkeley. Since 1989, he has been a chemistry professor at the University of Applied Sciences Darmstand, where at he presently is dean of students. [2]

Further reading
The following are cites given by Wiskamp in his Goethe article following: