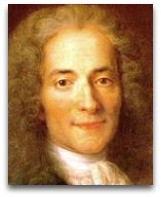 In existographies, Voltaire (1694-1778) (IQ:195|#17) (Cattell 1000:4) [RGM:34|1,500+] (Murray 4000:7|WL) (EPD:M7) (GPhE:#) [CR:313] was a French philosopher, writer, lay physicist, noted for having been an advocate of French philosopher Jean Sales' circa 1770s human molecular based atomic evolution theory; specifically Voltaire, the year of his death, visited Sales in jail to donate 500 pounds towards his release; and is noted for his work in connecting the experiments of Herman Boerhaave and Willem Gravesande (ball and ring experiment; ball and clay experiment) with the new mechanics of Isaac Newton and the later re-formulations of Emilie Chatelet.

Personal library
Voltaire's personal library contained evidence of interest in clandestine manuscripts, e.g. Benoit de Maillet, and his Telliamed, which taught that all living things emerged from the ocean (Ѻ)
Sales
In the late 1760s, if not earlier, Voltaire had developed an intellectual kinship with Jean Sales. In 1770, amid the publication of extreme atheist Baron d’Holbach’s 1770 The System of Nature: Laws of the Moral and Physical World, dubbed the “Atheist’s Bible”, Voltaire was lamenting about this to Sales; one version of this is summarized as follows:

“D’Holbach’s book caused a great stir among the Paris savants, effectively dividing the deists from the atheists. Voltaire, committed to deism and long impatient with d’Holbach’s declamatory ways, called it ‘a chaos, a great moral sickness, a work of darkness, a sin against nature, a system of folly and ignorance.’ He wrote to Delisle de Sales: “I think that nothing has debased our century more than this enormous stupidity.”

In 1777, Sales (age 36), while imprisoned for his The Philosophy of Nature: Treatise on Human Moral Nature (1770-initiated) was visited by French philosopher Voltaire (age 83), a year before his death, who gave 500 pounds to towards his release, the equivalent of $100,000 in 2015 inflation terms.

Hart 100
The following is the logic behind the Hart 100 rankings:

“In his book Letters of the English, Voltaire relates that during his stay in England, in 1727, he overheard some learned men discussing the question: who was the greatest man—Caesar, Alexander, Tamerlane, or Cromwell? One speaker maintained that Newton was beyond a doubt the greatest man. Voltaire agreed with this judgment, per the following reasoning:

‘It is to him who masters our minds by the force of truth, and not those who enslave them by violence, that we owe our reverence.”

Whether Voltaire was truly convinced that Newton was the greatest man who ever lived or was simply trying to make a philosophical point, the anecdote raises an interesting question: of the billions of human beings who have populated the earth, which persons have most influenced the course of history? This book is solely involved with the question of who were the 100 persons who had the greatest effect on history and on the course of the world. I have ranked these 100 persons in order of importance: that is, according to the total amount of influence that each of them had on human history and on the everyday lives of other human beings.”

Physics
Voltaire was one of the first to popularize Isaac Newton's calculus theories in France, assisted by his mistress, French mathematician Emilie Chatelet, a subject which he described as the art of the numbering and measuring exactly a thing whose existence cannot be conceived. [2]

In 1726, after being released from the Bastille (jail), on the condition that he go to England, Voltaire went to London, where he occupied himself mainly with mathematics and made himself familiar with the philosophy of Newton, of which he made a more special study afterwards at Leyden University. He remained in London for three years, then returned to Paris, made several journeys, and then in 1736 settled in Leyden under the name of “Revol”, which he dropped when he found the pseudonym was useless.

In a letter to the crown prince of Prussia (afterwards Frederick the Great), with whom he had entered into an active corresponds with, Voltaire says:

“I am the town of two simple citizens, Boerhaave and Gravesande attract from four to five hundred strangers.”

During this period, Voltaire was very busy writing a work on the philosophy of Newton, and received great assistance from the learned Gravesande and consulted with Boerhaave. [3]

Voltaire was one of the first radical critics of Christianity; himself, however, identifying with deism in belief; his views oft-cited in atheism circles.

In 1769, Voltaire, penned his God and Human Beings, one of the first works in comparative religion and mythology. [9]

In 1770, Voltaire, in his Epistle to the Author of the Book of the Three Imposters (Épître à l'Auteur du Livre des Trois Imposteurs), in response to John Toland’s circa 1720 Treatise on the Three Impostors, penned (Ѻ) one of his most-famous quotes: [1]

“I want my lawyer, my tailor, my servants, even my wife to believe in God, because it means that I shall be cheated and robbed and cuckolded less often. ... If God did not exist, it would be necessary to invent him.”

Voltaire, according to Ravi Zacharias (2008), is reported to have said that within a hundred years of his day, the Bible would be a forgotten book. (Ѻ)

Name
The name "Voltaire", which the author adopted in 1718, is an anagram of "AROVET LI," the Latinized spelling of his surname, Arouet, and the initial letters of "le jeune" ("the younger"). The name also echoes in reverse order the syllables of the name of a family château in the Poitou region: "Airvault". The adoption of the name "Voltaire" following his incarceration at the Bastille is seen by many to mark Voltaire's formal separation from his family and his past.

Tesla
Serbian-born American Nikola Tesla, somewhere along the lines, also engaged into a quest to master the works of Voltaire. The following are Tesla's reflections on this task:

“I had a veritable mania for finishing whatever I began, which often got me into difficulties. On one occasion I started to read the works of Voltaire when I learned, to my dismay, that there were close on one hundred large volumes in small print which that monster had written while drinking seventy-two cups of black coffee per diem.﻿ It had to be done, but when I laid aside the last book I was very glad, and said, ‘Never more!’”

Quotes | On
The following are quotes on Voltaire:

“I have been the more particular in stating the immense obligations history is under to Voltaire, because, in England there exists against him a prejudice, which nothing but ignorance, or something worse than ignorance, can excuse and because, taking him on the whole, he is probably the greatest historian Europe has yet produced. The vast labors of Voltaire towards reforming the old method of writing history, were greatly aided by those important works which Montesquieu put forward during the same period. In 1734, Montesquieu published what may be truly called the first book in which there can be found any information concerning the real history of Rome; because it is also the first in which the affairs of the ancient world are treated in a large and comprehensive spirit.”

“Where it is a duty to worship the sun, it is pretty sure to be a crime to examine the laws of heat.”

“There is a significance in the fact that it is actually the hundredth anniversary of the death of Voltaire (1878) with which Human, All Too Human, as it were, apologizes for being published. Voltaire is, in contrast to all who have written after him, above all a grandseigneur (Ѻ) of the spirit: precisely what I am too.”

“God if reason, the Bible is Newtonian physics; and the prophet is Voltaire.”

“Several are well above the 200 IQ mark. Arnauld, Comte, Goethe, Grotius, Laplace, Leopardi, Michelangelo, Newton, Pascal, the younger Pitt, Sarpi, Shelling, Voltaire and Wolsey probably rated at 200 IQ or even higher. A group containing Voltaire must approach or perhaps exceed a score of 200”

“Pascal and Voltaire both probably had IQs in the neighborhood of 200.”

Quotes | By
The following are noted Voltaire quotes:

“Oh Plato, so much admired! I fear that you have told us only fables, and have never spoken except in sophisms. Oh Plato! You have done more harm than you know. How so? I shall be asked, but I shall not answer?”

“Why should, and how can, existence be infinite? Newton demonstrated the reality of the vacuum. If in nature there can be a void beyond nature, wherein lies the necessity that entities should extend to infinity? What would an infinite extension be? It could no more exist that an infinite number.”

“The chain is not an absolute plenum. It is demonstrated that the heavenly bodies perform their revolutions in a non-resistant space. Not all space is filled. There is not, therefore, a series (suite) of bodies from an atom to the most remote of the stars; there can therefore be immense intervals between sensible beings, as well as between insensible ones. We cannot, then, be sure that man is necessarily placed in one of the links which are attached one to another in an unbroken sequence.”

“If all the geniuses of the universe were assembled, Newton should lead the band.”

“Every man is the creature of the age in which he lives; very few are able to raise themselves above the ideas of the time.”

“A clergyman is one who feels himself called upon to live without work at the expense of the rascals who work to live.”

“The question of good and evil remain in remediless chaos for those who seek to fathom it in reality. It is a mere mental sport to the disputants, who are captives that play with their chains.”