In science, walking molecule, similar to animate molecule, is an atomic structure or molecule, such as, myosin, kinesin or DTA, etc., that is able to move along a surface, through the action of induced movement, by alternating its appendices, driven by external energy source, e.g. heat or electric charge. [1]

History
The walking ability of kinesin seems to have been discovered in the late 1990s.

In September of 2005 a research team led German-born American physical chemist Ludwig Bartels at the University of California Riverside designed a molecule, called DTA or 9,10-DiThioAnthracene (Ѻ) molecule, with a body made of linked benzene molecules and two sulfur atom legs, which when cooled down to -223°C they form rows (Ѻ) and began to move in a straight line, walking on a flat copper Cu(111) surface, induce by a little heat, like a little human being. [2]

The news release for the results of this project, first published in the Physics Review Letters, was entitled ‘Molecule Walks Like a Human.’ [3] This tiny walking molecule, shown above, achieves this effect by mimicking the motor dynamics of a human walking. [4]

The molecule's motion, according to Bartels’ research team, was extremely stable: "in tests, DTA took more than 10,000 steps without losing its balance once. Our work proves that molecules can be designed deliberately to perform certain dynamic tasks on surfaces," said research leader Ludwig Bartels. "Similar to a human walking, where one foot is kept on the ground while the other moves forward and propels the body, our molecule always has one linker on a flat surface, which prevents the molecule from stumbling to the side or veering off course."

Philosophical implications
In hmolscience, the existence of so-called "walking molecules", whether naturally occurring in the cell, e.g. kinesin or dynein, or synthesized in the laboratory, e.g. DTA, frequently becomes a highlighted or pointed out example, when debates arise as to the so-called "nature" of a human defined chemically as a "molecules" (human molecule) or "chemical" (human chemical), e.g. in life vs. non-life debates (see: defunct theory of life), morality debates, etc., wherein one is forced to side with the conclusion that the movement of each "type" molecule, whether kinesin or human, abides by the same movement, work, and energy confines of the laws of thermodynamics.

Walking principle
The following is the schematic representation of working principle of the walker migration along the four-foothold track: [6]

The following is the chemical structure representation of working principle of the walker migration along the four-foothold track: [6]

DTA
This tiny walking-molecule, called 9,10-dithioanthracene or ‘DTA’, has two linkers that act like little mobile feet. DTA, is an organic molecule composed of a coal tar derivative called anthracene linked to a pair of sulfur-bearing functional groups on either side (referred to as "linkers"), which serve as the molecule's "feet". When the compound is heated on a flat copper surface, the linkers raise up, alternating from side to side, and propel the molecule forward.

Thus, obtaining its energy by heat supplied to it (similar to human molecules, obtaining their heat from the sun), the molecule moves such that only one of the linkers is lifted from the surface; the remaining linker guides the motion of the molecule and keeps it on course. Without the assistance of non-rails or nano-groves for guidance, the little molecule is able to alternate the motion of its two ‘feet’ so to walk in a straight line. These published results generated a great deal of interest and made the American Institute of Physics ‘Top 25 Physics Stories for 2005.’ 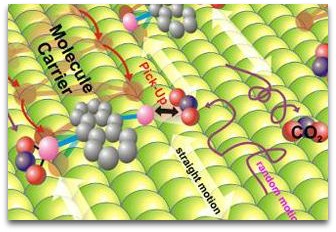 Bartels' molecular carrier can pick up and release up to two carbon dioxide (CO2) molecules and carry them along its straight path. ‘Carrying a load slows the molecule down’ explained Bartels. ‘Attachment of one CO2 molecule makes the carrier need twice as much energy for a step, and a carrier with two CO2 molecules requires roughly three times the energy. This is not unlike a human being carrying heavy loads in one or both hands.’ [5]

He said his team will be pursuing the next step for this molecule carrier. ‘Next, we would like to be able to make one go around corners, rotate its cargo or send out photons to tell us where it is.’ This depiction, of human molecules looking at and studying simpler walking molecules, from a humorous perspective, might be analogous to how English naturalist Charles Darwin felt when, in 1838, he first looked at the great chimpanzees and realized they were related to us. [1]

Kinesin
The following shows two examples of walking molecules, below left a walking human molecule and below right a walking kinesin molecule carrying a load along a microtubule. [6] The comparison of the two, human and kinesin, leads into philosophical debates in regards to what exactly is the fundamental difference between the two "types" of two-legged walking molecules? 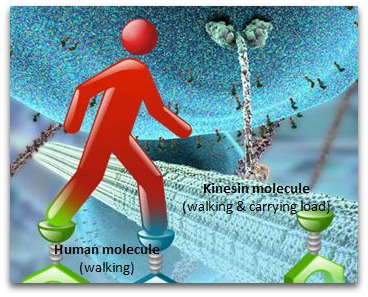 Shown below (left), is a two-legged kinesin molecule (left), carrying a load along a microtubule in a cell, as compared to a two-legged human molecule (right), pushing a boulder up a hill on the surface of the earth, which highlights certain philosophical conundrums in great need of rectification: life vs. non-life, free will, purpose, meaning, movement, mind-brain issues, consciousness, morality, etc., being that the "work" of each animate molecule is quantified by the very same thermodynamics.

Myosin
Myosins comprise a family of ATP-dependent motor proteins and are best known for their role in muscle contraction and their involvement in a wide range of other eukaryotic motility processes. They are responsible for actin-based motility. The term was originally used to describe a group of similar ATPases found in striated and smooth muscle cells

Multiple myosin II molecules generate force in skeletal muscle through a power stroke mechanism fuelled by the energy released from ATP hydrolysis. The power stroke occurs at the release of phosphate from the myosin molecule after the ATP hydrolysis while myosin is tightly bound to actin. The effect of this release is a conformational change in the molecule that pulls against the actin. The release of the ADP molecule and binding of a new ATP molecule will release myosin from actin. ATP hydrolysis within the myosin will cause it to bind to actin again to repeat the cycle. The combined effect of the myriad power strokes causes the muscle to contract. [9]