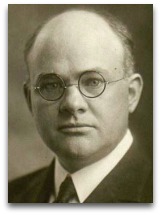 In hmolscience, Wallace Donham (1877-1954) was an American business school administrator noted for his 1933 speech “The Failure of Business Leadership”, wherein, via influence of American physical chemist and physiologist Lawrence Henderson, he compares discusses the physiology of society and its moving equilibriums: [1]

“The problem is one in the general physiology of society. The continuance of life and health for any individual depends on maintenance of a moving organic equilibrium within certain definite limits of tolerance. The daily work of the world is done by individuals living their specialized economic and social lives within a moving equilibrium … But specialized progress brought uneven social and economic developments and serious maladjustment. General equilibrium is lost. The limits of tolerance, the margins of safety, are exceeded.”

Donham was a Harvard classmate of Henderson, whom, as second dean of Harvard Business School (1919-1942), he associated with in the Harvard School of Business Administration. [2]

In 1927, Henderson, for example, established the Fatigue Laboratory at Harvard Business School to discover physiological norms for human biological processes and to study the physiological changes that cause fatigue in workers. [3]

This would seem to put Donham in the Harvard Pareto circle, in some sense.