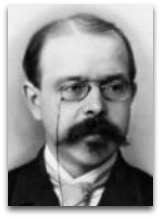 In existographies, Walther Nernst (1864-1941) (IQ:175|#231) (Odueny 100:65) (Cropper 30:7/T) (CR:121) was a German physical chemist, of the Berlin school of thermodynamics, notable for his 1888 work on thermodynamics of ion movement, for his 1893 statement of the ideal gas law in its modern form and for his 1906 “heat theorem”, regarding the nature of the measurement of chemical affinity in relationship to heat and free energy, later to be incorporated into the format of the third law of thermodynamics, work for which he was awarded the 1920 Nobel Prize in chemistry. [1]

Overview
In 1906, Nernst, in his Silliman lecture Experimental and Theoretical Applications of Thermodynamics to Chemistry, wrote: [5]

“In the hope of penetrating more deeply into the relations between chemical energy and heat, I have carried out in the last few years together with my students, a number of investigations on reactions at high temperatures in gaseous systems.”

Nernst is considered as one of the founding fathers of physical chemistry. [2] Notable students include Richard Abegg, Otto Sackur, and Gilbert Lewis, among others.

Education
Nernst became an assistant to Wilhelm Ostwald in 1887. (Ѻ)

Affinity and free energy
Nernst had an excellent grasp of the relationship between free energy, affinity, and the external work output of chemical processes as well as their relation to the natural advancement of processes in nature. In 1893, as to the question of determining the long-sought “chemical affinity” of a reaction, Nernst explains that neither the “heat-toning” (heat releasing) effects of a reaction, as French chemist Marcellin Berthelot had argued, in his 1875 principle of maximum work, nor the velocity of a reaction can function as a measure of affinity, but rather only the free energy can. In summary Nernst states: [3]

“Since every chemical process, like every process of nature, can only advance without the introduction of external energy only in the sense in which it can perform work; and since also for a measure of the chemical affinity, we must presuppose the absolute condition, that every process must complete itself in the sense of the affinity—on this basis we me may without suspicion regard the maximal external work of a chemical process (i.e. the change of free energy), as the measure of affinity. Therefore the clearly defined problem of thermo-chemistry is to measure the amounts of the changes of free energy associated with chemical processes, with the greatest accuracy possible … when this problem shall be solved, then it will be possible to predict whether or not a reaction can complete itself under the respective conditions. All reactions advance only in the sense of a diminution of free energy, i.e. only in the sense of the affinity.”

by Belgian theoretical physicist Théophile de Donder. This is equivalent to:

in a more direct sense.

Other
Nernst paid for a marble memorial to American engineer Willard Gibbs in 1906, shown adjacent; although they had never met. [4]

Quotes | By
The following are quotes by Nernst:

“I have already been to heaven. It was quite nice there, but I told them they could have it even better.”