In famous publications, Wealth, Energy, and Human Values: the Dynamics of Decaying Civilizations from Ancient Greece to America, with its noted appendix sectoin “The Fundamentals of Thermodynamics Applied to Socioeconomics”, is a 2009, 501-page, book by American physical chemist Thomas Wallace, in which physical chemistry logic, i.e. reactions, dynamics, mechanisms, transition states, chemical equilibrium, entropy production, etc., is applied to the explanation of the historical growth and decline of civilizations, using concepts such as reaction equations, A + B → C + D, Le Chatelier’s principle, and most importantly the Gibbs equation, ΔG = ΔH – TΔS, which is said to 'determine whether processes conducted by society will take place'. The book contains an appended chapter on ‘The Fundamentals of Thermodynamics Applied to Socioeconomics’. The sixth chapter, ‘The Mechanisms and Energetics of the Human Social Order’, goes into some interesting and detailed discussion of how a system of ‘societal reactions’ may be at a final state of thermodynamic equilibrium, thus not able to produce further useful work, but one in which, internally or rather visualized on the day-to-day basis, many reactions will still be proceeding, in both the forward and reverse sense. A larger aspect of the book utilized the ideal of societal entropy production, explained loosely as energy lost to social disorders.

Socioeconomic thermodynamics | Fundamentals
One of the most-interesting aspects of Wealth, Energy, and Human Values, aside from chapter six, is the 21-page appendix section ‘The Fundamentals of Thermodynamics Applied to Socioeconomics’, in which Wallace attempts to outline the physical chemistry basics of how a society transforms from a ‘initial state’ to a ‘final state’, differing by an amount of energy or rather ‘free energy’, and how the difference between these two states is a path-independent process determined by the enthalpy change ΔH and entropy change ΔS of the process of the societal transformation. The following aggregate quote summarizes the section:

In more correct detail, Wallace, here, to note, is using Boltzmann-Planck type entropy descriptions, which are specifically culled from gas theory, wherein the particles are said to have a non-correlation of velocities. Humans, however, have correlated velocities; subsequently it is necessary to return to the original work of Clausius and his universal description of entropy change as the ‘equivalence value of all uncompensated transformations’, to human social transformation. Beyond this, enthalpy is not simply an ‘energy content parameter’, but one must use the full expression for enthalpy:

to study human social systems in terms of both internal energy changes and the work-energy associated with volume changes in systems, such as exemplified by the volume change in territory in the course of the rise and fall of Rome during a 1,000-years of human reactions.

Reaction coordinates
In his appendix section, Wallace attempts to explain how a society or civilization must pass from an initial state to a final state, transforming along the way, a process that can be quantified on a reaction coordinate: 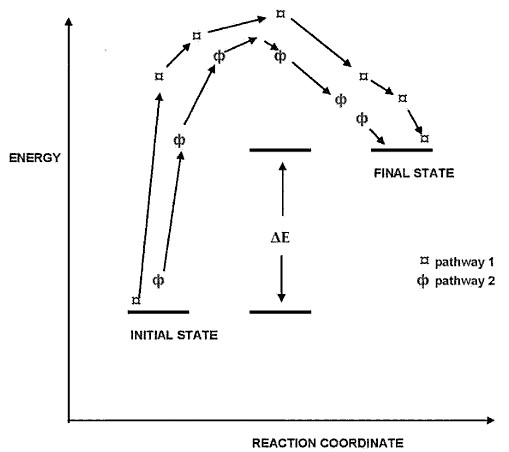 In his chapter six, on ‘The Mechanisms and Energetics of the Human Social Order’, Wallace explains how the 'final state', which typically represents a minimum of Gibbs free energy, in which the change in Gibbs free energy becomes zero, wherein the system can no longer produce useful work, may often still be seen as a very active 'dynamic equilibrium' state in which internal to the system forward and reverse reactions are still proceeding, but one in which overall there is no net change in free energy.