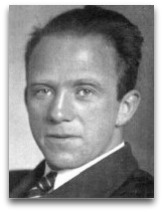 In science, Werner Heisenberg (1901-1976) (IQ:180|#84) (CR:107|#38), Ranker Greatest Mind (#45|1200+), was German theoretical physicist noted for his 1926 uncertainty principle, for his matrix mechanics, later shown to be equivalent to the Schrodinger equation work of Erwin Schrodinger, for his 1928-1933 work on the development of the theory of the exchange force, and for his 1952 dialogue (see: Heisenberg-Pauli dialogue) with Austrian theoretical physicist Wolfgang Pauli on the question of god, soul, the magnetic force—and by inference the electromagnetic force—and the need for future moral compasses.

In 1926, while working at Neil Bohr’s institute, Heisenberg is said to have realized that non-commutativity implies the uncertainty principle, and states this as such: [1]

“One can never know with perfect accuracy both of those two important factors which determine the movement of one of the smallest particles—its position and its velocity. It is impossible to determine accurately both the position and the direction and speed of a particle at the same instant.”

The uncertainty principle is frequently evoked unrationally in the humanities to explain and or justify all sorts of irreverent theories. One example is English physicist and marketing director Dan Cobley’s 2010 use of it to explain marketing theories. The uncertainty principle has been classified as an “ontic opening” by Swedish thinker Erland Lagerroth in regards to its use in fields outside of physics proper.

Exchange forces
It seems that in 1928, Heisenberg had invented a chemical bonding type of electron "exchange force" theory, which posited a purely quantum mechanical force arsing from the exchange of identical electrons, and had assigned Rudolf Peierls, one of Sommerfeld's students, to work on the idea, as applied to Felix Bloch's quantum mechanical electron theory of metals. Heisenberg's "exchange interaction" intuition, supposedly, was the notion of a force generated solely by the exchanging of positions of two totally indistinguishable quantum particles. [2]

Because of the exclusion principle (Pauli exclusion principle), no two electrons can be in the same quantum state. Since, unlike classical particles, quantum electrons are identical, they can be considered to exchange places continually, which gives rise to an additional "attractive exchange force" between electrons.

Heisenberg thus suggested that Peierls examine the effects of this force on Bloch’s theory of how electrons are able to propagate long distances in metals.

On 7 July, 1932, Enrico Fermi presented his report in Paris on “The Present State of the Physics of the Atomic Nucleus” (1932) without mentioning the type of force which was subsequently called “Majorana force” and which had actually been thought of, although in a crude form, some months earlier (circa Mar 1932 by Ettore Majorana). The issue of the Zeitschirft für Physick dated 19 July, 1932, contained Heisenberg’s first paper on what latter came to be called the “Heisenberg’s exchange forces”, namely forces involving the exchange of both the space and spin coordinates. [3]

At the 1933 Solvay Congress, Heisenberg had presented his neutron-proton nuclear theory to Fermi and others, according to which the neutron-proton force arises from the virtual exchange of an electron ("virtual" because energy conservation is violated for an instant).

In December of 1933, stimulated by Heisenberg, Fermi showed that both Heisenberg's force and conservation laws could be maintained if the neutron and proton exchange not just an electron but and electron and a neutrino. [2]

Religion
Heisenberg, his “uncertainty” principle being one of the most-employed ontic opening god tool, leans towards the science blended by religion side of the fence; this attitude can be seen in the 1927 Solvay Conference photo, wherein his "soul compass" (see: Heisenberg-Paul dialogue) idea is shown affixed below his name:

The following is Heisenberg's oft-searched for so-called "god glass" quote:

“The first gulp from the glass of natural sciences will turn you into an atheist, but at the bottom of the glass god is waiting for you.”

Education
Heisenberg completed his PhD under Arnold Sommerfeld, the same person who was the doctoral advisor for Wolfgang Pauli, Peter Debye, and Hans Bethe, all of whom won Nobel Prizes.