In queries, why does Libb Thims make genius lists?, an overly-common, reoccurring, and frequently asked question, particularly in genius studies, oft-referring to assumed reasonings behind the various IQ listings (e.g. IQ: 225+, IQ:200+, etc.) and genius listings (e.g. geniuses on) made by Libb Thims.

Overview
The short answer why Thims ranks and orders genius in listings, is: (a) an ideology that arose out of curiosity, and (b) per reason of mental ordering, e.g. for personal reasons, e.g. similar to the personal list of physics geniuses that Lev Landau carried round in his pocket (see: Landau genius scale), and for social reasons, in respect to public correction of gross error and misinformation.

Wherein, following recently updated CR page, and a finding that Clausius derived a large part of entropy from Thomson, the following downscaling actuated: 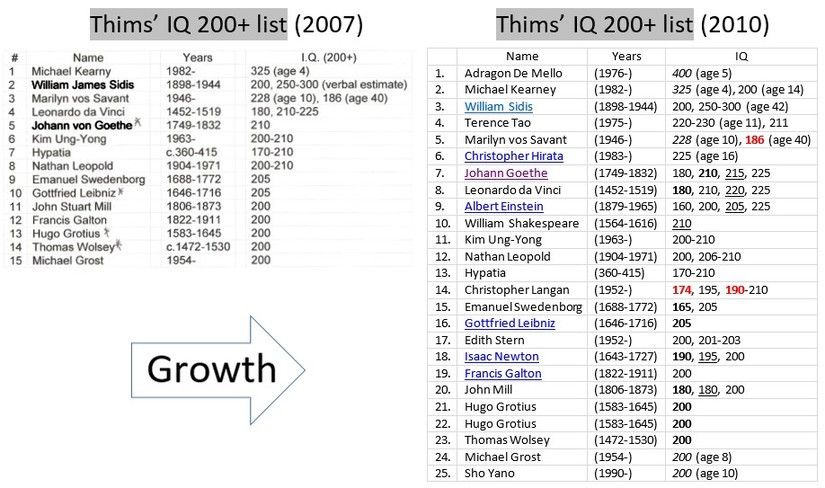 ● Thims discovered Christopher Hirata | 15 Feb 2010 (version 6); note: Hirata, and his concordant chemical thermodynamics based “Physics of Relationships”, was found by specifically search the Internet for people with IQs of 225 or above.

“I agree with Gladyshev’s 2012 statement that ‘Goethe's affinity can be interpreted on the basis of supramolecular thermodynamics. Changing of the Gibbs function occurring on the supramolecular structure level in complex systems (organisms). The affinity of Goethe is related to the phenomenon of sensory tropism’, but the reason Libb peddles Goethe and Hirata (although unlike Goethe, Hirata is the real deal) is that he thinks it allows him to peddle his ‘human chemistry’ BS, which in turn, he thinks will make it easier for him to peddle and sell his BS scam books on Human Chemistry. Essentially his entire website [eoht.info] is a book scam operation to try and sell his book. It’s funny that he goes on to give the illusion that there are other posters that agree with him. He has done the same laughable tactic where he cites some quote from some anon poster on how brilliant he is and that becomes the proof that he supposedly has an IQ in the range of 170-220. For the record NO ONE has an IQ over 200 despite what anyone claims. Having said that I certainly would put Fields medalist Manjul Bhargava (Ѻ) ahead of Goethe any day.”

● Thims’ discovered Goethe (IQ cited at 210 [Cox, 1926] or 225 [Merrill, 1925]), in namesake, either between 6 Aug 2005 (Prigogine’s Order Out of Chaos, which contains “footnote 2.5”, order placed) and 10 Oct 2005 (Goethe’s Elective Affinities, which contains the famous “chapter four”, order placed) [see: 900+ books ordered], and as the founder of human chemistry, either late that Oct or by 7 Nov 2006 wherein Thims was commenting to people via email that he was going to write a “basic textbook on human chemistry, based on on Carnot, Clausius, Gibbs, Helmholtz, Goethe, Gladyshev, and about a dozen others.” (Ѻ) Thims, accordingly, in c. Sep 2005, had read the Goethe Wikipedia page, wherein (Ѻ) the following information is found: “Catharine Cox, in her 1926 Early Mental Traits of Three Hundred Geniuses, speculatively estimated Goethe's IQ at 210, the highest score that she assigned.” (Sep 2005)

● Thims’ discovered Christopher Langan, who in Esquire Magazine (Nov 1999) was being billed as the “smartest man in America, with an IQ of 195) (1999)
● Thims’ discovered Marilyn Savant, who on the back cover of her The World’s Most Famous Math Problem (1993) characterizes herself as the “person with the highest recorded IQ in the world” (Ѻ), Guinness Book (1986) “highest IQ” listing of 228 (see: Guinness Book IQ) (circa 1990s)

● Thims engaged into a Faustian quest for knowledge in order to solve and understand the "vanity vs achievement paradox", such as exemplified in the drive-thru paradox (1987), as exemplified well in the the Good Will Hunting (1997) "bar scene", albeit riddled in evolutionary psychology things such as: Beckhap’s law (c.1975), the Buss sexual receptiveness study (1993) (Ѻ), sweaty T-shirt study (1995), colloquially known in the form of sayings such as Alley equation (c.2000) or the 19th century saying "no bees, no honey; nor work, no money".

Genius listings | Other
The following are related pages:

“There are two sorts of judges unto whom all writers are obnoxious, viz. the ignorant, and the judicious. As for the ignorant, they are such men as I before was speaking of, then whose approbation I dread nothing more: simili simile gaudet [‘like rejoices in like’] (Ѻ), is a maxim that holds true as well in all other things, as physics; and there is nothing would make me have so ill an opinion of myself, as to hear one of them commend me. But the other judge, viz. the man of learning and judgment, is the he I fear, and before him only will I arraign myself.”

“For all of you out there in Twitterland that think he or she is extremely smart, check out Hmolpedia to see how you compare with the geniuses.”

“How embarrassing for you, the chronic underachiever you are. Do not make lists of history's geniuses and think by placing yourself among them on your own website will you secure you among them.”

— Australian Anon (2017), “Why are you writing about yourself in the third person?” (Ѻ), Hmolpedia forum post, made from Buff Point, Australia, May 12

“I love this site. It's pure genius. I have never seen someone rank geniuses in such a brilliant way. I dedicated a [468+ genius] genealogy project (Ѻ) to your work. You even have a [Geni.com] profile (Ѻ) … because I feel your work deserves wider recognition. I am fairly intuitive … I feel you are descended from Goethe (or another genius on your list).”

“This [top 1000 geniuses] site is very good. Interestingly, outside Goethe and Leonardo da Vinci, most of the smartest on the list are physical [GPE] or mathematical [GME]. So, it is not mistaken the conception that studying physics or mathematics is the type of study that most requires intelligence to be undertaken [see: college degrees by intellectual difficulty]. Only below are philosophers and writers begin to appear. But I was surprised that there are no such genius composers as Beethoven, Bach, Brahms, and Wagner, or painters and sculptors, like Michelangelo, Renoir, and Van Gogh in the top 100. I cannot know which of the IQ indicators is the most reliable. I think the

(see: real IQ) presented is a good estimate. Note that above 180, which is taken as the lower limit of genius, there are only 209 people, which shows the rarity of genius, considering that more than twenty billion human beings must have been born [see: number of people who have existed]. Of course, many are not on the list because they were not prominent people.”

— James Allen (2019), Discussion (Ѻ) about my List of Greatest Mathematicians

“David Mayer carries around a piece of paper [see: paper IQ] that says he is ranked as having the 93rd highest IQ of all time. That would place him 7 places above Stephen Hawking who is ranked at 100. Naturally, this is complete bullśhit. Source: Top 1000 Geniuses Of All Time.”

Notes
N1. Note: on 4 Jun 2012, a first-draft general attempt at explaining where the 460+ person “genius IQs” page arose, is found in “list curator” section at the bottom of that page, which came into existence, when, firstly, on 31 May 2012 (version 191), Thims had listed himself, with up and down arrows (↑↓), between Gilbert Lewis (IQ:190) and Jean Sales (IQ:190) in position, after which, on 2 Jun 2012 (version 192), Thims removed himself from the list, for the third time (per reason, firstly, that ranking of “existive IQs”, in general, is a fluctuating thing; secondly, ranking of one’s own “existive IQ” (IQ state) is irritating to the mind) but then, on 4 Jun 2012 (version 193), re-added himself, NOT to the actual genius IQ listing, but to a section at the bottom of the genius IQ page, entitled “list curator”.