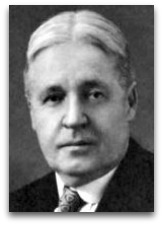 In chemistry, Wilder Bancroft (1867-1953) was an American physical chemist who, according to American thermal physicist Ralph Baierlein, is noted for coining the term “chemical potential”, a modified variant of American engineer Willard Gibbs original term “potential”, with whom he exchanged a number of letters. [1]

Bancroft founded the first American Journal of Physical Chemistry. He was one of the first reviewers of German physical chemist Otto Sackur’s 1912 A Text-book of Thermochemistry and Thermodynamics. [2] Bancroft is typically cited in the history of phase equilibrium the phase rule, and phase diagrams. [3]

Le Chatelier’s principle
In 1910, Bancroft gave a rather talked about address entitled “A Universal Law” on Le Chatelier’s principle wherein he makes assertions about the applicability of this principle to the migrations of nations, in respect to the balance between population and food supply, and re-establishment of equilibrium, among others. [4] The following is a popular quote:

“I wish to call your attention to-night to what I believe to be another universal law, a qualitative one and not a quantitative one. The chemists call it Le Chatelier’s Theorem. The physicists call it the the theorem of Maupertuis or the principle of least action. The biologists know it as the survival of the fittest, while the business man speaks of the law of supply and demand.”

Bancroft truncates all of this with the statement the broadest definition is that “a system tends to change so as to minimize an external disturbance.” He goes one to give a whole slew of (non-chemical) examples wherein he sees Le Chatelier’s principle at work.

American chemical engineer Harry Curtis, in commentary on Bancroft’s address, adds in that in engineering, Le Chatelier’s principle is conceptualized under the title "The Principle of Least Work." [5]