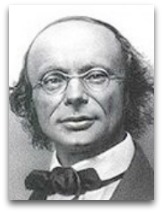 Quotes | On
The following are quotes on Weber:

“My theory of electrical forces is that they are called into play in insulating media by slight electric displacements, which put certain small portions of the medium into a state of distortion which, being resisted by the elasticity of the medium, produces an electromotive force ... I suppose the elasticity of the sphere to react on the electrical matter surrounding it, and press it downwards. From the determination by Kohlrausch and Weber of the numerical relation between the statical and magnetic effects of electricity, I have determined the elasticity of the medium in air, and assuming that it is the same with the luminiferous ether I have determined the velocity of propagation of transverse vibrations. The result is: 193,088 miles per second (deduced from electrical & magnetic experiments). Fizeau has determined the velocity of light = 193,118 miles per second by direct experiment. This coincidence is not merely numerical. I worked out the formulae in the country, before seeing Weber’s [sic] number, which is in millimeters, and I think we have now strong reason to believe, whether my theory is a fact or not, that the luminiferous and the electromagnetic medium are one.”

Quotes | By
The following are quotes by Weber:

“When the globe is covered with a net of railroads and telegraph wires, this net will render services comparable to those of the nervous system in the human body, partly as a means of transport, partly as a means for the propagation of ideas and sensations with the speed of lightning.”