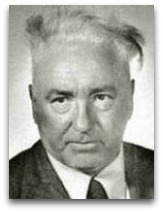 In psychology, Wilhelm Reich (1897-1957) was an Austrian-born American psychologist noted for his circa 1930 theory of “orgone energy”, a derivative or synthesis of "libido", namely the libido energy model of Sigmund Freud, and the sexual "orgasm", a type of universal vitalism-style radiating “biological energy” or orgasmic energy; a possible variant or spinoff of psychic energy model espoused by Sigmund Freud and Carl Jung school of psychodynamics, that was proposed to be something that could be quantified and measured. [1]

Education
After serving in the Austrian army on the Italian front, Reich began attending classes at the University of Vienna and graduated in 1922 as a doctor of medicine. While studying for his doctorate, Reich became a protégé of Sigmund Freud, and soon after graduating became a clinical assistant at Freud's Psychoanalytical Clinic. [3]

In 1934, after being expelled from the International Psychoanalytic Association, he moved to the US where he working on his orgone theory, started a laboratory in Maine, an observatory, and a publishing house called Orgone Press. In 1954 a lawsuit was filed against him for selling his “orgone accumulators” after which he was sentenced to two years in prison, where he died in 1957. [2]