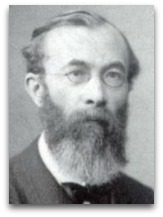 In existographies, Wilhelm Wundt (1832-1920) (Simmons 100:99) (CR:8) was a German physician, physiologist, and philosopher, characterized as the “founder of psychology”, noted for his theory of “animated will-centers” (Wil-lenszentren), said to be comparable to Ernst Haeckel’s “animated atoms” (bescelte Atome) theory. [1]

Overview
Wundt, in his System of Philosophy, sought to understand the human mind by identifying the constituent parts of human consciousness, in the same way that a chemical compound is broken into various elements and who viewed psychology as a science, much like physics or chemistry, in which consciousness is a collection of identifiable parts.

Education
Wundt studied with Johannes Muller and had been assistant to Hermann Helmholtz.

Students
German psychologist Oswald Kulpe was a student of Wundt.

Ward
American sociologist Lester Ward’s aimed-to-be sociological theory of everything, as outlined in his Glimpses of the Cosmos: Volume 6, a compilation of Ward’s collected works, of the period 1897-1912, a post humorous outline of Ward’s system of sociology, planned and largely executed, is given, the aim of which was to reduce sociology to an exact science, consisting of social mechanics (social statics and social dynamics), viewed through the guise of the formation and transformation of cosmic, organic, and social structures. The parts Ward’s ‘system of sociology’ are summarized to be representative of (a) formative principles or synergy, based on the work of Auguste Comte and Jean Lamarck; (b) creative synthesis, based on the work of Wundt; (c) transformative principles, based on the work of, primarily, Leon Winiarski.

“The great man of science, unless he is also a philosopher (I think of such names as Newton and Gauss, Linnaeus and Darwin, Copernicus and Galileo), deserves the title of genius as little as the man of action. Men of science are not universal; they deal only with a branch or branches of knowledge. This is not due, as is sometimes said, merely to the extreme modern specialization that makes it impossible to master everything. Even in the nineteenth and twentieth centuries there are still amongst the learned men individuals with a knowledge as many-sided as that of Aristotle or Leibnitz; the names of von Humboldt and William Wundt at once come to my mind.”

“The naturalist now readily admits that plants have souls—or will-power—but he appropriates the soul as an energy of thermodynamics.”