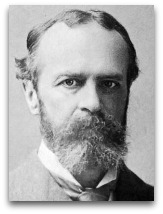 Second law
James rejected the second law of thermodynamics; specifically, according to James: [1]

“The ‘second law’ is wholly irrelevant to ‘history’—save that it sets a terminus—for history is the course of things before the terminus.”

James had commented this in objection to his friend American historian Henry Adams who was writing a theory, suggesting that the second law undermined all of human history. [2] On the contrary, James reasoned that between the beginning and the end, human activity rather than levels of physical energy “is the most important rill we know of.”

Geniuses
In 1880, James, in his “Great Men, Great Thoughts, and the Environment” (Ѻ), penned the following about epicenter geniuses:

“Sporadic great men come everywhere. But for a community to get vibrating through and through with intensely active life, many geniuses coming together and in rapid succession are required. This is why great epochs are so rare, – why the sudden bloom of a Greece [Aristotle], an early Rome [Cicero], a Renaissance [Goethe], is such a mystery. Blow must follow blow so fast that no cooling can occur in the intervals. Then the mass of the nation glows incandescent, and may continue to glow by pure inertia long after the originators of its internal movement have passed away.

We often hear surprise expressed that in these high tides of human affairs not only the people should be filled with stronger life, but that individual geniuses should seem so exceptionally abundant. This mystery is just about as deep as the time-honored conundrum as to why great rivers flow by great towns. It is true that great public fermentations awaken and adopt many geniuses who in more torpid times would have had no chance to work. But over and above this there must be an exceptional concourse of genius about a time, to make the fermentation begin at all. The unlikeliness of the concourse is far greater than the unlikeliness of any particular genius; hence the rarity of these periods and the exceptional aspect which they always wear.”

Herbert Spencer | 1904
In 1904, James had the following to say about English natural philosopher Herbert Spencer's calculus of forces theory of social force: [6]

“But what on earth is ‘social force’? Sometimes he identifies it with ‘social activity’ (showing the latter to be proportionate to the amount of food eaten), and sometimes with the work done by human beings and their steam-engines, and shows it to be due ultimately to the sun’s heat. It would never occur to a reader of this pages that a social force proper might be anything that acted as a stimulus of social change,—a leader, for example, a discovery, a book, a new idea, or a national insult; and that the greatest of ‘forces’ of this kind need embody no more ‘physical force’ than the smallest. The measure of greatness here is the effect produced on the environment, not a quantity antecedently absorbed from physical nature. Mr. Spencer himself is a great social force; but he ate no more than the average man, and his body, if cremated, would disengage no more energy.”

The tricky issue that James is grappling with here, in regards to the discorrelation between the average food intake versus the average greatness of a person is that food intake is surface-substrate interaction factor that only effects the lowering of the activation energy barrier to a reaction, whereas free energy change is what quantifies the relative greatness of a person, in that the latter is a result of person-to-person or person-to-society human chemical reaction factors.

Henry Adams | 1910
James' life work, according to biographer Robert Richardson, was the “discovery, retrieval, and harnessing of previously unused energies (reserve energy) that lie dormant within us.” [4] Yet in early 1910, in spite of his own theories on this subject, James’ reserve energies, within himself, were running out, and he was in a state of great downward depression. According to Richardson, “life”, for James, “had slowed almost to a halt”. In this state, however, in mid-June of 1910, James had finished reading his friend American historian Henry Adams’ newly published 125-page Letter to American Teachers of History, which argued based on the second law that the energy of society and of human activity tends to run down, towards inevitable heat death. On his near death bed, James was so stirred in protest to Adams presentation that he quickly fired of a riposte, dated June 17th: [5]

“To tell you the truth it doesn’t impress me at all, save by its wit and erudition, and I ask you whether an old man soon about to meet his maker can hope to save himself from the consequences of his life by pointing to the wit and learning he has shown in treating a tragic subject. No, sir, you can’t do it, — can’t impress God in that way.”

James then concedes, in a discourse on religious thermodynamics, that:

“It main be admitted that your Creator (and mine) started the universe with a certain amount of ‘energy’ latent in it, and decreed that everything that should happen thereafter should be a result of parts of that energy falling to lower levels; raising other parts higher, to be sure, in so doing, but never in equivalent amount, owing to the constant radiation of unrecoverable warmth incidental to the process.”

He then got down to cases:

“I protest against your interpretation of some of the specification of the great statistical drift downwards of the original high-level energy … [history is] the course of things before that terminus.”

As an example, James states:

“Physically a dinosaur’s brain may show as much intensity of energy-exchange as a man’s, but it can do infinitely fewer things, because as a force of detent it can only unlock the dinosaur’s muscles, while the man’s brain, by unlocking far feebler muscles, indirectly can by their means issue proclamations, write books, describe Chartres Cathedral etc. and guide the energies of the shrinking sun into channels which never would have been entered otherwise—in short make history. Therefore the man’s brain and muscles are form the point of view of the historian, the more important place of energy-exchange, small as this may be, when measured in absolute physical units.”

James followed up this letter with two postcards (June 19 and 26) furthering his position. James died on August 26, exactly two months after sending his last postcard to Adams. Richardson, in his 2007 biography on James, comments on this last stand effort take before his death: [4]

“What can one say about the philosophical bravado, the cosmic effrontery, the sheer panache of this ailing philosopher with one foot in the grave talking down the second law of thermodynamics? It is a scene fit to set alongside the death of Socrates.”

In 1906, in what seems to be followup to the issues he had with Spencer's social forces theory, namely that the energy of food eaten does not correlated with the energy or force associated with "a leader, a discovery, a book, a new idea, or a national insult", James gave his speech-turned-article “The Energies of Men”, wherein he claims to have discovered a hidden mental energy principle, i.e. "reserve energy", concurrently with his protege Russian-born American psychologist Boris Sidis. [7]

William James Sidis
One of James’ noted students at Harvard was Russian-born American psychologist Boris Sidis who was so enamored with James and his theory of reserve energy, that he applied it to the accelerated raising of his newborn son William James Sidis (named after William James) to actuate a resultant adulthood IQ of 250-300, one of the world’s highest documented intellects. William James Sidis later went on to script his greatest work The Animate and the Inanimate upon a theory of “reversals of the second law” to explain the existence of life. [3]

Quotes | By
The following are quotes by James:

“Romeo wants Juliet as the filings want the magnet; and if no obstacles intervene he moves towards her by as straight a line as they. But Romeo and Juliet, if a wall be built between them, do not remain idiotically pressing their faces against its opposite sides like the magnet and the filings with the card. Romeo soon finds a circuitous way, by scaling the wall or otherwise, of touching Juliet's lips directly. With the filings the path is fixed; whether it reaches the end depends on accidents. With the lover it is the end which is fixed, the path may be modified indefinitely.”

“Ideas, whether for arousing or for stopping belief, may fail to be efficacious, just as a wire at one time alive with electricity, may at another time be dead.”


“Conversions, whether they be political, scientific, philosophic, or religious, form another way in which ‘bound energies’ are let loose. They unify, and put a stop to ancient mental interferences. The result is freedom, and often a great enlargement of power. A belief that thus settles upon an individual always acts as a challenge to his will. Whatever it is, it may be a highwater mark of energy, in which ‘noes’, once impossible, are easy, and in which a new range of ‘yeses’ gain the right of way.”


“The terms have to remain vague; for though every man of woman born knows what is meant by such phrases as having a good vital tone, a high tide of spirits, an elastic temper, as living energetically, working easily, deciding firmly, and the like, we should all be put to our trumps if asked to explain in terms of scientific psychology just what such expressions mean. We can draw some child-like psychophysical diagrams, and that is all. In physics the conception of ‘energy’ is perfectly defined. It is correlated with the conception of ‘work’. But mental work and moral work, although we cannot live without talking about them, are terms as yet hardly analyzed, and doubtless mean several heterogeneous elementary things. Our muscular work ire a voluminous physical quantity, but our ideas and volitions are minute forces of release, and by ‘work’ here we mean the substitution of higher kinds for lower kinds of detent.”