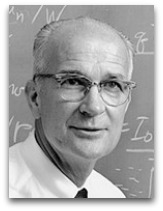 In existographies, William Shockley (1910-1989) (IQ:175|#260) was an American physicist and electrical engineer, noted generally for being the Bell Labs research group manager of John Bardeen, aka the “thinker”, and Walter Brattain, aka the “tinkerer”, who together, as a group, invented the “transistor” (1947).

Quotes | On
The following are quotes on Shockley:

“A more valid criticism — and this is crucial to understanding the flaw in Shockley's argument too — lies in what IQ did not measure in Terman's study. Most obviously, Terman missed the two Nobel Laureates. Neither Shockley nor Luis Alvarez had IQs above 135. Shockley was tested twice and missed both times. Whatever talent they had went unmeasured by Terman's questions. One hypothesis is that the tests do not measure mathematical prowess very well, but is that ability not a facet of what we mean by ‘intelligence’?”

“Two of the students Terman deemed to be insufficiently intelligent to participate in his study, Luis Alvarez and William Shockley, won the Nobel Prize in Physics. None of the Termites received a Nobel Prize or a Pulitzer Prize. Nor did any of the Termites become world-class musicians like Isaac Stem and Yehudi Menuhim — two other students rejected by Terman for insufficient IQ scores. ‘All in all’, writes David Shenk, the author of The Genius in All of Us (2010), Terman's epic studies in genius turned out to be studies in disappointment’.”

Quotes | By
The following are quotes by Shockley:

“I often laugh at how I couldn’t qualify for Terman’s gifted study, yet go on to in a Nobel Prize in Physics?”