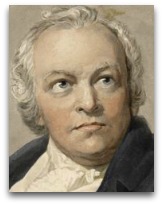 Energy | Eternal delight
In 1793, Blake, in his The Marriage of Heaven and Hell, opens to the following:

1. Man has no body distinct from his soul. For that called body is a portion of soul discerned by the five senses, the chief inlets of soul in this age.
2. Energy is the only life, and is from the body; and reason is the bound or outward circumference of energy.
3. Energy is eternal delight.

Quotes | On
The following are quotes on Blake:

“I think that Blake's IQ was off the charts. His mind was capable of maximum development in multiple fields of endeavor. Obviously his senses were acutely capable of receiving and processing more data than most of us can handle. He was sensitive to ethical and philosophical issues as well as religious and aesthetic ones. His sexual responses were so acute that he recognized them as an avenue to the Divine. Intellectually he could have gone in any direction he chose.”

Quotes | By
The following are noted poetic quotes by Blake:

“Genius is always above its age.”

“Mock on, Mock on Voltaire, Rousseau: Mock on, Mock on: 'tis all in vain! You throw the sand against the wind, And the wind blows it back again. And every sand becomes a Gem Reflected in the beams divine; Blown back they blind the mocking Eye, But still in Israel's paths they shine. The Atoms of Democritus And Newton's Particles of light Are sands upon the Red sea shore, Where Israel's tents do shine so bright.”