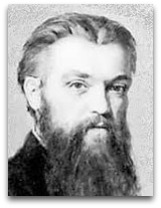 Panpsychism
In 1874, Clifford, in his “Body and Mind”, claimed that science had bridged the gap between organic and inorganic, that the same chemical elements and laws of physics applied to both realms, and hence the laws of organic were only a “complication” of the inorganic.

Gravitation
Clifford, supposedly, was the first to suggest that gravitation might be a manifestation of an underlying geometry.

“I hold that in the physical world nothing else takes place but this variation [of the curvature of space].”

Quotes | By
The following are quotes by Clifford:

“It is wrong always, everywhere, and for anyone, to believe anything upon insufficient evidence.”

“A little reflection will show us that every belief, even the simplest and most fundamental, goes beyond experience when regarded as a guide to our actions.”

“When an action is once done, it is right or wrong for ever; no accidental failure of its good or evil fruits can possibly alter that.”

“If a man, holding a belief which he was taught in childhood or persuaded of afterwards, keeps down and pushes away any doubts which arise about it in his mind, purposely avoids the reading of books and the company of men that call in question or discuss it, and regards as impious those questions which cannot easily be asked without disturbing it — the life of that man is one long sin against mankind.”