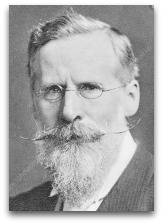 In existographies, William Crookes (1832-1919) (IQ:150|#663) (Murray 4000:12|C) (CR:3) was a British chemist and physicist; noted for his for his 1870 invention of the Crooke tube, and cathode-ray studies, fundamental in the development of atomic physics, and for his discovery of the element thallium.

Overview
In 1870, Crookes developed the so-called “Crookes tube”, a glass tube, with a partially-evacuated vacuum, having a cathode attached to one end, and an anode attached to another end, therein allowing so-called “cathode rays” to be seen visually streaming from the cathode to the anode.

In 1897, Joseph Thomson, after experimenting with cathode-ray tubes, published a paper, in which he postulated that the cathode rays are streams of “negatively electrified particles” [i.e. electrons] with mass; data from which, in 1904, became the backbone of the “plum pudding model” of atomic theory.

Quotes | On
The following are quotes on Crookes:

“What is this word ‘life’ for him who has only existed in order to hand down his name to posterity in the footnotes of a classic or as an inventor of an integral. [To answer this question] I rush from science to philosophy, and from philosophy to our old friends the poets; and then, over-wearied by too much idealism, I fancy I become practical in returning to science. Have you ever attempted to conceive all there is in the world worth knowing — that not one subject in the universe is unworthy of study? The giants of literature, the mysteries of many-dimensional space, the attempts of Boltzmann and Crookes to penetrate nature's very laboratory, the Kantian theory of the universe, and the latest discoveries in embryology, with their wonderful tales of the development of life — what an immensity beyond our grasp! … Mankind seems on the verge of a new and glorious discovery. What Newton did to simplify the planetary motions must now be done to unite in one whole the various isolated theories of mathematical physics.”

“The world is full of well-educated people who have made stupid choices, a phenomenon referred to by scientists as ‘dysrationalia’. A survey of Canadian Mensa Club members, whose membership is limited to those in the top two percentiles of IQ, demonstrates this nicely. Among those surveyed, 44% believed in astrology, 51% bought into biorhythms and 56% believed that earth has been visited by aliens. Martin Heidegger, a well-respected philosopher, used his keen mind in support of the Nazi party, using spurious arguments to defend reprehensible behavior. William Crookes, who discovered the element thallium, was repeatedly swindled by spiritual mediums but could never be persuaded to give up his spiritualist beliefs. And Isaac Newton, a scientist without equal, lost his fortune in the South Sea Bubble through a fundamental misunderstanding of the nature of markets and human behavior. Smarts, it would seem, are no guarantee of being a rational actor. Yes, the lessons you have just learned will be least available to your mind when they are most needed. Studies suggest that we lose roughly 13% of our cognitive capacity under stress, lending credence to Nassim Taleb's advice: ‘Even once we are aware of our biases, we must recognize that knowledge does not equal behavior. The solution lies in designing and adopting an investment process that is at least partially robust to behavioral decision-making errors.”