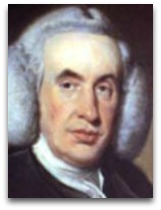 In existographies, William Cullen (1710-1790) (IQ:175|#243) (GCE:17) (CR:73) was a Scottish physician and chemist who, according to chemistry historian Maurice Crosland, pioneered affinity reaction diagrams, the precursors to chemical reaction equations (see: history of chemical equations), during his 1757 lectures on the use of French chemist and physician Étienne Geoffroy's 1718 affinity table. [1]

Lectures
Cullen was a charismatic lecturer, attracting large classes. He always came before a class with a manuscript or lengthy notes that he revised each year, but he rarely used them and spoke extemporarily. He gave the students the necessary background of information, but this was never presented as a list of facts to be memorized, rather as a journey of exploration into the mysteries of diseases and the processes that caused them. The professor and his students were companions on the journey. Phrases like ‘as far as I know’ and ‘I am persuaded’ abound in his lectures and textbooks. [2]

Students
One of his most notable pupils was Scottish physicist and chemist Joseph Black, a central founder of thermochemistry.

Affinity reaction diagrams
In 1748, Cullen printed and distributed among his students “The Plan of a Course of Chemical Lectures and Experiments, Directed Chiefly to the Improvement of Arts and Manufactures, to be Given in the Laboratory of the College of Glasgow”. [5]

In 1757, Cullen began to use Geoffroy’s affinity table in lectures at the University of Aberdeen. [1] To help in explaining to his students the idea of ‘single elective attractions’ (single displacement reactions) and ‘double elective attractions’ (double displacement reactions), Cullen pioneered the use of reaction arrows ‘→’ or ‘darts’, as he called them, drawn diagonally to represent the affinity tendencies of the individual species in the reaction. In addition, he introduced the conception of using brackets ‘{’ to represent a bonded association.

In Cullen’s lecture notes, a core example used is the list of species in the third column of Geoffroy’s affinity table. At the head of the third column, i.e. row-one, column-three (R1:C3), is nitric acid HNO3 which Cullen labels as N : A. The relative affinities of nitric acid, according to Geoffroy, are in the order: iron ♂, copper ♀, lead ђ, mercury (R5:C3), and silver (R6:C3). Therefore, iron would displace copper from a solution of copper in nitrous acid and would similarly displace lead, mercury, and silver from their solutions of nitrous salt. Using the conception of affinity arrows and bonding brackets, Cullen used diagrams in his lectures to represent these individual reactions steps of single elective affinities or single displacement reactions.

Refrigeration
In 1748, Cullen was the first to make artificial refrigeration, using the phenomenon of cold being produced by evaporating liquids (nitrous aether), plus a vacuum. Cullen's device has come to be known as the Cullen refrigerator.

Heat
In 1756, Cullen, in his “Of the Cold Produced by Evaporating Fluids and Some Other Means of Producing Cold”, which dealt with the phenomenon of cooling by evaporation, particularly in reduced pressures, called attention to the fact, first noted in the 17th century, that water boils at lower temperatures as the pressure is reduced. [6]

Quotes | By
The following are quotes by Cullen:

“Chemistry is an art that has furnished the world with a great number of useful facts, and has thereby contributed to the improvement of many arts; but these facts lie scattered in many different books, involved in obscure terms, mixed with many falsehoods, and joined to a great deal of false philosophy; so that it is no great wonder that chemistry has not been so much studied as might have been expected with regard to so useful a branch of knowledge, and that many professors are themselves but very superficially acquainted with it. But it was particularly to be expected, that, since it has been taught in universities, the difficulties in this study should have been in some measure removed, that the art should have been put into form, and a system of it attempted—the scattered facts collected and arranged in a proper order. But this has not yet been done; chemistry has not yet been taught but upon a very narrow plan. The teachers of it have still confined themselves to the purposes of pharmacy and medicine, and that comprehends a small branch of chemistry; and even that, by being a single branch, could not by itself be tolerably explained. I do not choose the invidious task of derogating from established reputations; but were it necessary, I could easily show that the most celebrated attempts towards a system or course of chemistry are extremely incomplete, as examining but a few of the objects of chemistry; that of those examined a very scanty and imperfect account of their relations to other bodies is given ; and that, even what is given, is in a method inconvenient and faulty. Now this is the case with the generality of the books on chemistry; but I must take notice, however, that Dr Stahl is one who has endeavored to avoid these faults; he has taught chemistry with a more general view, and attempted to collect the chemical facts, and to range them in a better order. Perhaps we have the substance of Dr Stahl's lessons, in a book published by a disciple of his, Dr Juncker of Halle, under the title of Conspectus Chemiae. This is the fullest collection that I have met with, and I have made a good deal of use of it, and you may do so too; but I must notice at the same time, that it is written in such a clumsy manner, is mixed with so much pedantic, trifling philosophy, and is often so inaccurate and superficial in describing experiments, that it will not contribute much to the propagating of chemical knowledge.”

Quotes | On
The following are quotes on Cullen:

“After Boerhaave's decease, the lectures on chemistry were continued at Leyden by his pupil Gaubius, whose lectures on that subject seem to have been circulated extensively in manuscript, and to have been much sought after by Cullen.”