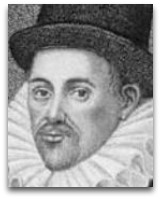 In existographies, William Gilbert (1544-1603) (IQ:185|#76) [RGM1301|1,500+] (Murray 4000:18|P) (CR:34) was an English chemist-physicist and physician, known as the "father of magnetism", noted for his 1600 De Magnete, a work which rejected Aristotle’s natural philosophy, Galen’s medicine, and Ptolemy’s astronomy, and in its place situated an electricity-magnetism based Copernican cosmology, a work that in a way was a precursor to the gravity-based Copernican cosmology of Isaac Newton and his 1687 Principia.

Floating loadstones
His magnetic cosmology of a rotating earth was, in part, said to be based on his experiment where spherical lodestones were floated on water in small wooden boats, which showed that magnetic forces often produce circular motion (see also: Alfred Mayer and his 1878 floating magnets experiment) (see also: turning tendencies). [1]

Electron
In his De Magnete, Gilbert was the first to use the New Latin term electricus to mean “like amber in it is attractive properties”, which came from the Greek word for amber, ήλεκτρον (ēlektron). Based on Gilbert’s usage, in 1646 term ‘electricity’ was introduced by Thomas Browne. In 1894, Irish physicist George Stoney coined the term electron: "an estimate was made of the actual amount of this most remarkable fundamental unit of electricity, for which I have since ventured to suggest the name electron." According to quantum electrodynamics, i.e. according to Richard Feynman, it is the interaction of the electron and light that is the root cause of all human behavior. [3]

Magnetic gravity
English mathematician and astronomer Edmond Halley (1656-1742), having been influenced by Gilbert's theories, believed that the movements of comets were governed magnetically. English physicist Isaac Newton culled much of his astronomical data measurements for his 1687 Principia from Halley and it was Halley in turn who paid for Newton's Principia to be published. [4]

“May the gods damn all such sham, pilfered, distorted works, which do but muddle the minds of students.”

“In the discovery of secret things and in the investigation of hidden causes, stronger reasons are obtained from sure experiments and demonstrated arguments than from probable conjectures and the opinions of philosophical speculators of the common sort.”