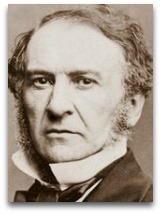 In hmolscience, William Gladstone (1809-1898) was an English statesman noted for his 1880s effort to argue for the inerrancy of the Bible, and advocating for the reality of miracles, etc., using semi-scientific arguments.

Huxley | Pearson
In 1885, Gladstone, with the publication of his “Dawn of Creation and of Worship”, publically butted heads with figureheads such as Thomas Huxley and Karl Pearson on questions of surrounding the conflicts between Genesis, geology, and modern science. [1]

Pearson, e.g., seemingly gave his 1885 “Matter and Soul” lecture, wherein he puts the extrapolate down argument in the form of an Aunt Sally in regards to consciousness and life (as a mechanism), supposedly, arisen from "dead mechanism", as a response to Gladstone’s article. [2]

Miracles | Impossibilities
In 1891, Thomas Huxley, in the Agnostic Annual, published an article dealing with some of the New Testament miracles. In reaction to this, in connections to references to “Gadarene swine” (Ѻ) and the “existence of demons” (Ѻ), Gladstone had the following hilarious words to say: (Ѻ)

“I am unaware of anything that has a right to the title of an ‘impossibility’ except a contradiction of terms. There are impossibilities logical but none natural. A 'round square’, a ‘present past’, ‘two parallel lines that intersect’, are impossibilities, because the ideas denoted by the predicates, round, present, intersect, are contradictory of the ideas denoted by the subjects, square, past, parallel. But walking on water, or turning water into wine, or procreation without male intervention, or raising the dead, are plainly not ‘impossibilities’ in this sense. In the affirmation that the man walked upon water the idea of the subject is not contradictory of that in the predicate. Naturalists are familiar with insects which walk on water, and imagination has no more difficulty in putting a man in place of the insect, than it has in giving a man some of the attributes of a bird and making an angel of him; or in ascribing to him the ascendive tendencies of a balloon, as the ‘levitationists’ do.

Undoubtedly, there are very strong physical and biological arguments for thinking it extremely improbable that a man could be supported on the surface of the water as the insect is; or that his organisation could be compatible with the possession and use of wings; or that he could rise through the air without mechanical aid. . . . But it is sufficiently obvious, not only that we are at the beginning of our knowledge of nature, instead of having arrived at the end of it, but that the limitations of our faculties are such that we never can be in a position to set bounds to the possibilities of nature. The same considerations apply to the other examples of supposed miraculous events.

The change of water into wine undoubtedly implies a contradiction, and is assuredly ‘impossible’ if we are permitted to assume that the ‘elementary bodies’ of the chemists are now and forever immutable. Not only, however, is a negative proposition of this kind incapable of proof, but modern chemistry is inclining to the contrary doctrine. And if carbon can be got out of hydrogen or oxygen, the conversion of water into wine comes within range of scientific possibility— it becomes a mere question of molecular arrangement. As for virgin procreation, it is not only clearly imaginable, but modern biology recognizes it as an everyday occurrence among some groups of animals. So with restoration to life after death.”