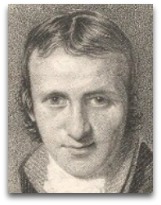 Overview
In c.1780, Godwin, while taking a stab at the vocation of ministry, prior to turning to writing as a vocation (1783), one of his parishioners in Stowmarket, Suffolk, gave him key works of the French enlightenment, namely: Baron d’Holbach, Helvetius, and Jean Rousseau, after which this theology dwindled towards deism and his politics turned toward Whig opposition. [1]

In 1793, Godwin, published Political Justice, which is said to be most influenced by the Holbach, Helvetius, and Rousseau, respectively. [2]

Quotes | By
The following are quotes by Godwin:

“He that loves reading has everything within his reach.”

“Let us not, in the eagerness of our haste to educate, forget all the ends of education.”