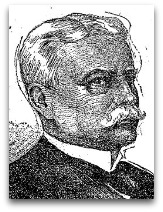 Edison | Review
In 1910, Thomson, in his “Author of Brain and Personality Replies to Edison: Dr. W.H. Thomson, Whose Book the Inventor Quoted, Says That Any One Denying the Immortality of the Soul is Either Abnormal or Pathological”, argued the following position: [1]

“People who do not believe in the immortality of the soul are abnormal, if not pathological.”

“The criticisms which have been hurled at me have not worried me. A man cannot control his beliefs. If he is honest in his frank expression of them, that is all that can in justice be required of him. Professor Thomson and a thousand others do not in the least agree with me. His criticism of me, as I read it, charged that because I doubted the soul's immortality, or 'personality,' as he called it, my mind must be abnormal, 'pathological,' in other, words, diseased. I greatly admire Thomson. What he said about my mind did not disturb me. I try to say exactly what I honestly believe to be the truth, and more than that no man can do. I honestly believe that creedists have built up a mighty structure of inaccuracy, based, curiously, on those fundamental truths which I, with every honest man, must not alone admit but earnestly acclaim.”

Overview
W.H. Thomson’s father was the reverend William McClure Thomson (1806-1894), author of The Land and the Book, a best-selling description of the area of Lebanon and Palestine, used as a means of illustrating and illuminating passages from the Bible. [5] During these years, at least by the 1850s, W.H. Thomson became a relatively good sketch artist, drawing a number illustrations, e.g. Bethlehem (Ѻ), that appeared in his father’s and his later books.

In 1892, Thomson gave his “Materialism and Modern Physiology of the Nervous System” Address (turned-book) before the Philosophical Faculty of Columbia College, wherein he set out to address the nature of the materialism vs anti-materialism debate, centered around those including Thomas Huxley and George Romanes (“The Fallacy of Materialism”), in respect to physiology, the nervous system, and the biological sciences. [4]

On 1 May 1909, Thomson published What is Physical Life? Its Origins and Nature, wherein he sets out to address the following query—otherwise known as the great problem of natural philosophy: [3]

“No intelligent person can fail to be interested in the great question, what makes physical matter living matter? This question has been the oldest, and still remains the latest topic of scientific discussion. It is well, therefore, to recognize at the outset why no agreement has been reached on the subject.”

To this query, Thomson, in this book, sets out to prove the following:

“Enough has been demonstrated already to prove that the hypothesis of earthly life every having had a spontaneous, or mechanical, or physico-chemical origin, is wholly untenable.”

Education
In 1892, Thomson was a professor of material medicine and of diseases of the nervous system, at the University of New York.