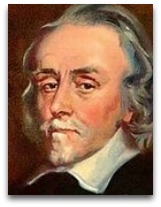 Soul | Life
The following are Harvey’s views on the soul:

Biogenesis
Some attribute Harvey as the originated or first to state the principle of biogenesis, namely the logic that life and only come from life; the following, supposedly, was stated by Harvey: [1]

“Every living thing from an egg” [attributed]

Dean Wooldridge, similarly, states that Harvey, historically, has been assigned the epitaph “father of modern biology” for his used of ordinary engineering principles, governing the pumping and flowing of liquids, to account for functions of the heart. [2]

Physiocracy
Francois Quesnay, in his physiocracy economic tables, in which he explained the flow of goods and services, at each step in the passage downward, modeled on a combination of Harvey’s heart pump models and Rene Descartes’ machine models of blood flow model of the body. [3]