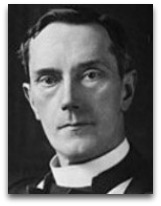 In hmolscience, William Inge (1860-1954), or "Dean Inge" or "Gloomy Dean" (Ѻ), as he was commonly known, being Dean of St Paul's Cathedral, was English writer and priest noted, in religious thermodynamics, for his 1931-33 lectures on the heat death as a evidence for divine eschatology.

Overview
In 1931, Inge, in his Warburton lectures at Aberystwyth University, Wales, explored the “religious and philosophical implications of the law of entropy”. [1]

Inge’s views were summarized in an April article in Philosophy, which resulted in a response letter by Canadian philosopher W.E.M. Mitchell on the subject of animate thermodynamics, in which Mitchell points out seeming inconstancy between Inge’s article, which argues that thermodynamics applies to animate nature as well as inanimate nature, and James Johnstone’s July article, which concludes (incorrectly) that entropy is the inorganic world (non-carbon based) and decreasing in the organic world (carbon-based); which leaves the reader with the incorrigible view that time’s arrow (1928) points in both directions (↔). [2]

In 1934, Inge, in his God and the Astronomers, used thermodynamics to argue for the existence of God. [3] In this treatise, according to American chemical thermodynamicist Benjamin Kyle, Inge eagerly accepted the law of entropy as proof of a creator, and argued that the god of Christianity was unique, compared to pantheistic gods of the natural religions, because gods of the latter type would be subject to the thermal death of the universe, but is not the fate of the Christian god. [4]

“Modernist philosophy is wrecked on the second law of thermodynamics.”