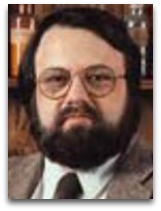 In existographies, William B. Jensen (1948-) (DN:7) (CR:23) is an American chemistry historian noted for his research into the etymology of thermodynamic the symbols such as: "R", the universal gas constant, and "Q" for heat; several articles on the chemical thermodynamics work of August Horstmann, who Jensen claims was the first person to convert R into a universal gas constant; for a number of chemistry caricatures, such as his 1970 Gilbert Lewis caricature, as shown below; and for his 2012 Notebooks of an Epicurean Materialist, in which he outlines his thermodynamics based philosophy. [7]
Thermodynamic philosophy

Jensen’s encapsulated 2012 summary statement, from his Notebooks of an Epicurean Materialist, of his particular thermodynamic philosophy (see also: philosophical thermodynamics), being openly atheist (contrary to the status of most scientists, who predominately, in the range of 95 percent, are atheist "but do not like to say so", in the words of Napoleon (see: Napoleon-Laplace anecdote), is as follow: [5]

“As a scientist, I feel, both intellectually and esthetically, that the laws of thermodynamics are by far the most powerful and significant product produced by western science. As a secular humanist, who believes that the human race is ultimately on its own and cannot count on some last minute supernatural intervention to bail it out of its collective woes, I feel that the confrontation between these laws and the apparent inability of humans to transcend their biologically ingrained imperative to reproduce at all costs will form the ultimate test of whether civilization, and possibly even the human race itself, will survive in the future.”

In short, Jensen classifies himself as an "Epicurean materialist", a modern version of the 307BC philosophy of Greek philosopher Epicurus, an atomic materialist (see: atomic theory), who, following in the steps of Democritus, was an advocate of materialism, led him to a general attack on superstition and divine intervention, and, following Aristippus—about whom very little is known—believed that pleasure is the greatest good, but the way to attain pleasure was to live modestly and to gain knowledge of the workings of the world and the limits of one's desires. This led one to attain a state of tranquility (ataraxia) and freedom from fear, as well as absence of bodily pain (aponia). The combination of these two states is supposed to constitute happiness in its highest form. [6]

In 1977, American chemist Ralph Oesper, noted for his 1975 The Human Side of Scientists, a book on chemical anecdotes, left a substantial endowment to the Chemistry Department at the University of Cincinnati for the support of activities in the history of chemistry.

The department decided to use this fund to support a faculty position in chemical education and history of chemistry, and in 1986 Jensen was appointed Oesper Professor of Chemical Education and History of Chemistry. Jensen decided to use the endowment to start a new American journal for the history of chemistry, known as the Bulletin for the History of Chemistry, and to expand the small collections of rare books, journals, and portraits which Oesper had accumulated over the years. In addition, Jensen, who had been an avid collector of antique chemical apparatus since his days as a graduate student at the University of Wisconsin, decided to add a third collection devoted to the history of chemical apparatus.

During the next 14 years, the book, journal, portrait and apparatus collections were increased more than a hundred fold, much of the apparatus being acquired as donations resulting from the many lectures on the history of chemistry which Dr. Jensen gave during these years at various small colleges and schools. In 2000, a doubling of the endowment resulting from the death of Oesper’s son, Dr. Peter Oesper, allowed the collections to acquire space for the separate housing of the books, journals and prints, as well as a museum area, with an accompanying work area and store rooms, for the antique apparatus. Currently the book and journal collections, which span the period 1600-1960, contain more than 17,000 volumes, whereas the portrait collection contains more than 2,500 portraits, prints and photographs related to the history of chemistry, and the apparatus collection more than 4,000 artifacts.

Other
In 1979, Jensen published The Lewis Acid-Base Concepts, on Gilbert Lewis’ 1923 notion of an acid as that which can employ an electron and a base as that which can donate an electron, and in 2002 published Mendeleev on the Periodic law: Selected Writings, on Russian chemist Dmitri Mendeleyev’s 1869 periodic table.

Caricatures
Jensen’s interesting in drawing caricatures began in about 1968 when he was a junior chemistry student at the University of Wisconsin-Madison and attending Aaron Ihde’s lectures on the history of chemistry. Each week, rather than taking lecture notes, Jensen would instead select one of the chemists that Ihde was lecturing on and do a caricature based on the portraits found in Ihde’s textbook, The Development of Modern Chemistry (1964).

This original set has since been supplemented by about another half-dozen caricatures prompted by requests over the years from various individuals and journals. In the 1970s there was little interest in these drawings, but with the passage of time, a sort of underground demand for them has spontaneously arisen among teachers and students of chemistry and many have since been reproduced on coffee mugs, T-shirts, and on various internet sites. More recently, one of them (Robert Bunsen) was even being used as the logo for a rock band. A collected works set of Jensen’s caricatures can be found in his 2010 book Chymists: That Strange Class of Mortals: Caricatures of Famous Chemists with a Few Physicists and Biologists Added. [4]

Religion | Atheism
In 2011, Jensen, in his “Atheism and Free-Thought in 19th-Century Cincinnati”, a talk at the 20th Anniversary Conference of Cincinnati Free Inquiry Group, gave some historical snapshots of noted atheists, supposedly. [8]

In 2014, Jensen stated a version of his atheist’s creed.

References
1. (a) Jensen, William B. (2003). “The Universal Gas Constant R” (abstract: “this column traces the history of the gas constant R and the probable reason for its representation by the letter R.), J. Chem. Edu. 80: 731.
(b) Jensen, William B. (2009). “August Horstmann and the Origins of Chemical Thermodynamics”, Bull. Hist. Chem.
(c) Jensen, William B. (2009). “Introduction to the English Translation of the ‘The Theory of Dissociation’ by August Horstmann: a Forgotten Classic of Chemical Thermodynamics”, Bull. Hist. Chem.
(d) Lewis caricature (original) – Woodrow.org.
2. Oesper Collections (history) – University of Cincinnati.
3. (a) Jensen, William. (1972). The Secondary Chemistry Textbook and the History of Secondary Chemistry Teaching: 1820-1960, M.S. Thesis, University of Wisconsin, Madison, WI.
(b) Jensen, William. (1982). Investigations of the Quarternary M/MCl4/X8 /Al2CI6 Systems (where M = Zr, Ti, and X8 =S, Se,) and Related Melts, Ph.D. Thesis, University of Wisconsin, Madison, WI.
4. Jensen, William B. (2010). Chymists: That Strange Class of Mortals: Caricatures of Famous Chemists with a Few Physicists and Biologists Added. Oesper Collections.
5. (a) Email communication to Libb Thims on atheism and philosophical point of view.
(b) Jensen, William B. (2012). Notebooks of an Epicurean Materialist. In press.
6. Epicureanism – Wikipedia.
7. Thims, Libb. (2012). "Email to Libb Thims" (on his Dawkins number: reply: "I would say I am a seven"), Apr 9.
8. Jensen, William. (2011). “Atheism and Free-Thought in 19th-Century Cincinnati: Some Historical Snapshots,” 20th Anniversary Conference of Cincinnati Free Inquiry Group, Cincinnati, OH., 15 October.