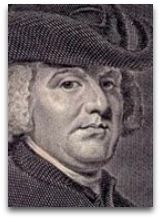 Paley graduated senior wrangler at Christ’s College, Cambridge, after which he taught a course on moral philosophy, themed on Samuel Clarke, Joseph Butler, and John Locke; which later formed the basis of his Principles of Moral and Political Philosophy (1785). [1]

Watch analogy
In 1802, Paley published Natural Theology: Evidences of the Existence and Attributes of the Deity, wherein he gives his now infamous “watchmaker analogy”, according to which he stated that if he was walking on a heath—or tract of wasteland—and he came across a pocket watch, it would be most reasonable to assume that someone had dropped it and that it was made by a watchmaker and not by natural forces; the original statement of which is as follows:

“In crossing a heath, suppose I pitched my foot against a stone, and were asked how the stone came to be there; I might possibly answer, that, for anything I knew to the contrary, it had lain there forever: nor would it perhaps be very easy to show the absurdity of this answer. But suppose I had found a watch upon the ground, and it should be inquired how the watch happened to be in that place; I should hardly think of the answer which I had before given, that, for anything I knew, the watch might have always been there. Yet why should not this answer serve for the watch as well as for the stone?

Why is it not as admissible in the second case, as in the first? For this reason, and for no other, viz. that, when we come to inspect the watch, we perceive (what we could not discover in the stone) that its several parts are framed and put together for a purpose, e.g. that they are so formed and adjusted as to produce motion, and that motion so regulated as to point out the hour of the day; that if the different parts had been differently shaped from what they are, of a different size from what they are, or placed after any other manner, or in any other order, than that in which they are placed, either no motion at all would have been carried on in the machine, or none which would have answered the use that is now served by it.”

The gist argument, which is a rock vs human argument relocated to the focus of a watch, is that design implies a designer, and that designer must be god. [2]

Quotes | On
The following are quotes on Paley:

“Bangs have bangers, information has an informer, and rigged dice have riggers.”